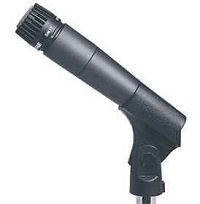 Polar coordinates provide us with an alternative way of plotting points and drawing graphs. You can express complicated graphs using simple polar functions. One of the applications of polar graphs is to describe the characteristics of microphones.

Polar graphs are quite different to those we produce using our familiar Cartesian coordinate system (the familiar x-y axes).

In the polar coordinate axis system, the point (r, θ) is defined as follows. Along the (horizontal) polar axis, go out r units, then rotate in a positive direction (anti-clockwise) about the pole by an amount θ. This is shown in the following diagram.

We normally use polar graph paper to plot such points. Here is the same point (7, 120°) plotted on a polar graph grid:

Here are the 4 points we have considered so far:

The graph of those 4 points is as follows:

We continue adding points and obtain the following values in the table:

Graphing all the points found so far gives the following (in red), with some other points added (in blue, obtained by substitution):

Joining all the points, we get the following circle:

We can easily graph some interesting shapes using polar coordinates, as follows. (These can become very complicated and ugly if we use the normal x-y coordinate system.)

The following cardioid is the graph of the function r = 1 − sin θ. This time the start point for the graph is at (1, 0°) (which is at 1 on the horizontal polar axis) and the curve is generated from there in an anti-clockwise direction.

It is called a cardioid because it is heart-shaped.

This is the graph of r = sin 4θ. The result looks like the petals of a flower.

The shape of this one reminds me of the echidna (the Australian spiny anteater that rolls itself up into a ball when threatened). The function involved is: r = sin 44θ − 2 cos θ

You can find more information and examples about polar coordinates in this introduction to Polar Coordinates. You can also print your own polar graph paper (in PDF form).

Different microphones have different recording patterns depending on their purpose.

a. Omni-directional Microphone: This microphone is used when we want to record sound from all directions (for example, for a choir).

The recording pattern is almost circular and would correspond to the polar curve r = sin θ that we met above.

The following diagram shows a real recording pattern for an omni-directional microphone, graphed on polar graph paper. The different curves are for different frequencies, and the placement of the microphone is at the center of the circle. At low frequencies the pattern is almost circular, but at higher frequencies it becomes less so and more erratic.

b. Cardioid Microphone: This is a uni-directional microphone, which means we only want to pick up sounds from in front (one direction). The recording pattern is a cardioid, which we met above. In the following image, I have used the graph of r = 1 + sin θ. (There is some "spill", where sounds immediately behind the microphone are also detected.)

c. Shotgun Microphone: This is a "super-directional" mike, where we only want to pick up sounds from directly in front of the mike. The graph used for this example is r = θ2.

d. Bi-directional Microphone: This is used in an interview situation, where we want to pick up the voices of the interviewer and the person being interviewd.

So next time you see a microphone (in your mobile phone, notebook computer, in a recording studio or wherever), remember that the shape of its recording pattern is an interesting application of graphs using polar coordinates!