Here's an interesting question to consider.

Each of us has 2 parents. They in turn had 2 parents, so there are 4 people in that generation to whom we are related.

There's a problem - we can't have exponentially growing nunbers of ancestors forever. If we go back 30 generations (to around 1200 AD), we would have around 230 = 1,073,741,824 ancestors, which is more than the number of people in the world at the time. At some point, the number of ancestors needs to begin shrinking, so that we end up with our one common ancestor in the distant past.

So what's going on?

Ancestry of a duck tolling retriever

Of course, there are going to be overlaps. For example, my first cousin shares some of the same ancestors that I do (our grandparents are in common), and my second cousin and I share the same great grandparents. Every now and then, people marry someone who is closely related (either knowingly or otherwise) and the number of unique ancestors is reduced even more.

This was an issue for European royalty (especially Spain's), who considered their number of potential marriage partners to be quite limited, and so they happily married cousins, uncles, grandchildren and nieces.

The interesting question is: How far back do we need to go to run out of unique ancestors, considering everybody alive today?

It turns out this occurred around 1200AD when the maximum number of real ancestors was around 2 million, not one billion as we discussed earlier.

One of the great results from this article is that probably everyone alive is at least 50th cousin to everyone else.

So indeed, we are all one family...

In an article about border collie ancestry, there are some interesting images depicting dog ancestry and pedigree collapse.

The author, Christopher, first presents this image of the first 10 sets of ancestors of his border collie Mercury.

By the time we get to the 80th generation, we see a distinctive diamond-shaped pedigree collapse: 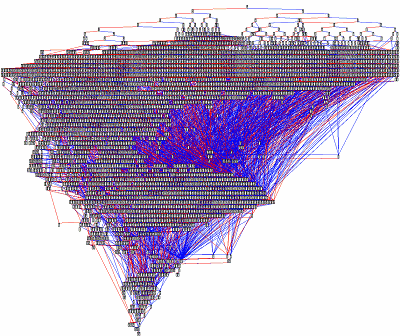 This is similar to the first image in this article, which shows an interesting fish-shaped pedigree collapse pattern, for a duck tolling retriever dog.

Pedigree collapse is the result of inbreeding, an undesirable (when the relationship is too close), but inevitable feature of human and animal reproduction.