How Societies Choose to Fail or Survive 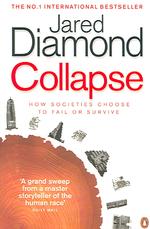 For most of my life, the US has been regarded as the invincible superpower. But it is interesting that in the last few years there has been speculation on the end of the "US civilisation".

Diamond's book is mostly about ecological disasters that civilisations brought on themselves, by their own ignorance, their bad luck or their unwillingness to let go of previously held beliefs. He does not suggest that the US is about to collapse anytime soon, but he does point out that any society that does not respect its environment is vulnerable.

Diamond proposes a 5-point framework for the collapse of civilisations due to environmental factors:

Using this framework, Diamond describes in great detail the collapses of Easter Island (due to deforestation of a fragile ecosystem, so that large stone statues could be erected). Pitcairn Island, The Anasazi of southwest USA, the Maya of Central America, the Vikings and Greenland.

The analysis of how Japan averted disaster was especially interesting. Tokugawa Japan in the 17th and 18th centuries went through a population boom, which of course meant a building boom. Trees were disappearing at a rapid rate, since timber is the favourite building material of the Japanese. Fortunately they realised that landslides and soil degradation could be reduced by maintaining forest cover. So they began planting trees and to this day, Japan has one of the highest ratios of forested land in all industiralised countries. The downslide is that they still need timber and so now they are destroying Malaysian and Papua New Guinean rainforest by importing timber from those countries. They also import a significant amount of woodships from Australia - silly Australia.

The horrors of the Rwanda genocide are explained through an analysis of overpopulation and poor resource utilisation.

The chapter on China's rapid growth is very scary. Will they apply any of the painful environmental lessons from the industrialised countries? It seems this is happening but only in a limited sense.

I was interested to read what Diamond had to say about Australia. He lived in Canberra for some time as a visiting pofessor. He loved Australia, but was amazed at the poor use of water, the importation of many pests (rabbits, foxes, sheep, cattle, cane toads) into marginal land, government policies that guaranteed clearing of land (not preservation) and salinity problems due to excessive water use. His conclusion is quite striking − Australia should abandon farming and import its food. I'm sure that suggesiton would not go down well with Australia's farmers, but maybe he's right.

The book is well worth reading, if somewhat pedantic in parts.