When I was a kid, fish was cheap (because there was plenty of it) and chicken was expensive (because factory-style chicken farming was not so widespread).

In more recent years, fish has been getting more expensive because it's getting harder to find. And of course, this is due to overfishing and insufficient aquaculture.

Fish are one of the best protein sources we have, especially as they provide us with Omega 3 fatty acids (which are essential for brain development), and they can improve cholesterol.

There have been some well-documented collapses in fish stocks, including: 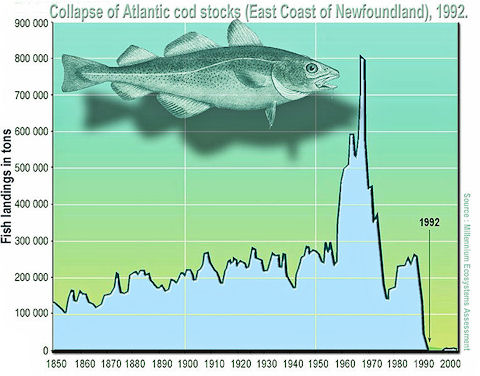 It is possible to have a sustainable fishing industry with proper planning and strictly enforced quotas.

One way to achieve good planning is to model the inputs (food availability, breeding rate, water temperature, pollutants) and the outputs (natural deaths, commercial fishing). Such modeling can be done using differential equations.

, where x is the amount of fish in the sea (as a mass, or possibly as a gross number of fish), and t is the time (usually in months or years).

Built in to each fish stock equation is a positive (growth) term (dependent on food supply, breeding rates, etc), and a negative (inhibition) term (due to limits on food availability, etc).

Here's a highly simplified example of a model for the amount of fish expected in a particular area bounded by some fixed geographic boundary (for example, a bay):

The growth term is the x outside the brackets on the right hand side, and the negative inhibition term is contained in the brackets. The number "12" is important, since this indicates a stable value for the amount of fish, all else being equal.

We need a starting value. In this example, for illustration, we start with 500 tonnes of fish in the sea, and we write it like this (our unit for mass of fish throughout the equations and graphs in this discussion is "thousand tonnes"):

Next, we solve our differential equation, with the given initial condition. (I have used computer software to solve it. For those interested to see how it is done on paper, see the Comments for this post below, and Solving DEs by Separation of Variables).

Our solution is a function of time (which will be in years for the purpose of this discussion), and we can graph it to see what is going on. 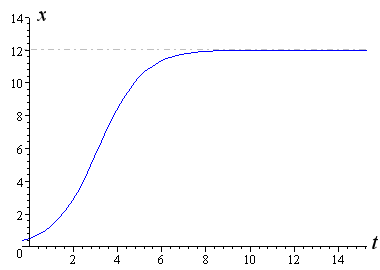 Notice at t = 0, the value of x is 0.5, which is what we specified earlier. Notice also that the quantity of fish grows exponentially at first (for about 3 years), then grows less rapidly, and eventually levels off after about 9 years at the stable 12,000 tonne value.

In practical terms, this means there is enough food, and other conditions are just right, for the fish to maintain a mass of around 12,000 tonnes in our particular bay.

Let's now look at the case where, for some reason (it could be a temporary increase in food supply), the amount of fish went beyond 12,000 tonnes. If the food supply then returns to normal, the bay will not be able to sustain so many fish.

To illustrate, we let the initial condition be 14,000 tonnes of fish.

This time when we solve the differential equation, we get this expression:

Now for the graph: 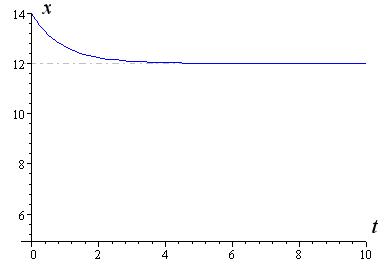 We choose our starting value as the stable value of 12,000 tonnes.

Here is the graph: 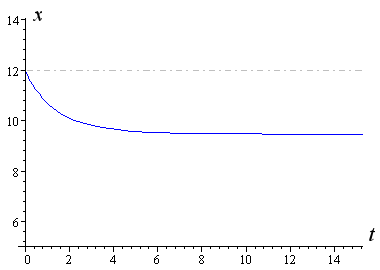 We see that fishing has dropped the overall amount of fish (by slightly more than the 2,000 tonnes fished each year), but fishing stocks are stable.

(I haven't included the solution for x in this case, since it involves the real part of the hyperbolic tanh of a logarithm, which is somewhat beyond this discussion.)

In our first example above, we started with a small amount of fish (500 tonnes) and plenty of food.

If we try to fish 2,000 tonnes per year, of course our fish stocks will collapse. 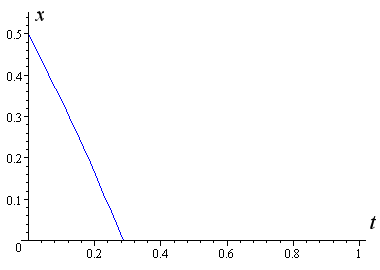 There are not enough adult fish to lay eggs, so no new fish are being produced, and the result is the numbers reduce rapidly to zero.

This is the differential equation for this situation, and the initial value.

The solution in this case is given by: 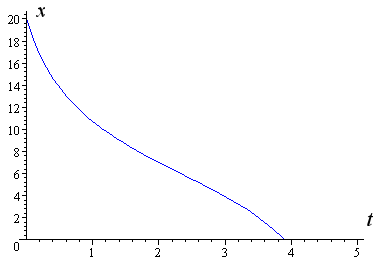 The collabse is not quite so abrupt, but it's still a collapse. This fishery cannot sustain this rate of fishing, even though we started with a highly overpopulated situation.

The Pacific El Niño occurs every 5 years or so. In normal years, cold water upwells along the coast of Peru, bringing with it an explosion of sea life. The Peruvian anchovy does very well in such conditions. The anchovy is very important for Peru's economy, and the fishmeal industry provides protein for a wide range of industries.

However, in El Niño years, the Peruvian waters become very warm, the amount of food for the anchovies drops dramatically, and so the anchovy fish catch drops.

The following is a highly simplified model that takes into account El Niño effects.

We assume the El Niño occurs regularly every 5 years. We start with a high fish stock rate (20 tonnes) to see more clearly what happens. 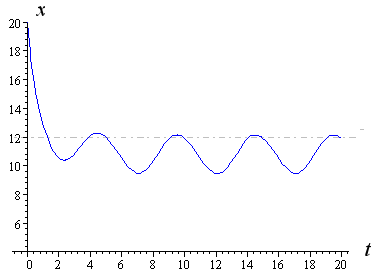 We can see there are troughs at year 2, 7, 12 and 17. These are El Niño years, when the amount of food available drops, and so the fish stocks also drop. In the intermediate years, 5, 10, 15 and 20, conditions return to normal and we see a good recovery in fish stocks.

In practice, the drop in fish numbers is quite sudden, and the build up is a lot slower than indicated by the regular curves above.

(It is not possible to solve this differential equation using normal algebraic methods. I needed to solve it numerically, and the software gave me a set of numbers which I used to give the above graph.)

During the 21st century, we can expect to see more fish stock collapses. It is inevitable with the increase in human population, the rapid rise of the middle class in China and India (and increasingly, Africa), overfishing, pollution and global warming. As land-based protein production becomes difficult due to polluted water, depleted topsoil and yes, global warming, there will be even more pressure on our ocean animals.

So whould we stop eating fish? I hope not. But at least we should be more active in finding out where the fish comes from, and only buy fish from companies that use sustainable practices. Look for the Marine Stewardship Council logo on the packaging.

Logo of the Marine Stewardship Council

There are opportunities for those with math skills in all this. Learn as much as you can about mathematical modeling, and get involved in planning for more sustainable fishing, especially in your local area.

A billion people will benefit from your skills.

This recent TED talk describes a census of the oceans, and several warnings about the future.