Math of drugs and bodies (pharmacokinetics)

Pharmacokinetics is the process whereby substances (like food and drugs) are ingested into the body (via mouth or needles) and processed. We'll concentrate on drugs. 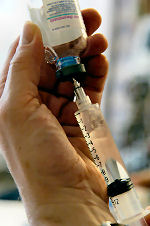 The process of pharmacokinetics has 5 steps:

Of course, each drug needs to act on the body in a different way. Some drugs need to be absorbed quickly (like nitroglycerin if we are having a heart attack) and preferably eliminated quickly (otherwise toxins build up in the blood). For other drugs, we want slow absorption so we get maximum benefit and don't lose a lot of it from excretion.

So when your doctor prescribes (say) "take 2 tablets 3 times a day after food", this is based on the desirable levels of drug concentration and known levels of distribution, metabolism and excretion in the body.

There comes a point when the concentration no longer increases and begins to decline. This is the period when the drug is fully distributed and metabolism is taking place. As time goes on, the drug concentration gets less and less and falls below a certain effective amount. Time to take some more pills.

We have the following variables:

V = volume distributed in the body

C = concentration of the drug at time t

F = fraction of dose which has been absorbed (also called bioavailability)

Absorption part: This depends on the amount of the drug given, the fraction that has been absorbed and the absorption rate constant. It decreases as time goes on. The expression for absorption is given by:

Elimination part: The elimination dynamic is affected by the elimination constant, the volume distributed in the body and the concentration left of the drug. The expression for this part is:

We now substitute some typical values for our variables (without units to keep things simple. Note C is a variable (not a constant here), the one for which we seek an expression in t.)

Solving this differential equation (using a computer algebra system), gives the concentration at time t as: 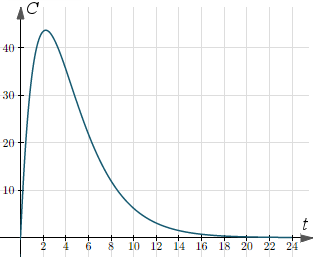 Pharmacokinetics is yet another interesting "real life" application of math.

[Based on: A First Course in Pharmacokinetics.
Photo credit: Syringe]

See the 30 Comments below.

30 Comments on “Math of drugs and bodies (pharmacokinetics)”