I came across this interesting piece of trigonometry history recently.

Jacob's Staff was invented in the 13th century as an aid in finding heights and distances. It was not until the 15th century that the German scientist Johannes Mueller popularized the instrument.

This was the age when the Europeans began exploring beyond the Mediterranean Sea. They needed better navigation tools so they could more accurately determine their latitude and longitude, and not run into too many rocks.

Jacob's Staff was shaped like a cross-bow. It had a main rod with a scale, and several cross pieces which were used to determine angles, either from the horizontal looking up (the "angle of elevation"), or perhaps between 2 objects.

We need to use half angles and half distances when measuring with this tool.

"The tangent of half the desired angle is given by taking half of the length of the crossbar, and by deducting the main rod length divided by the distance from the eye to the cross bar."

That's quite a mouthful, so let's look at an example.

If we know the height of a tower h, and measure the angle using our Jacob's Staff to be θ, then a good approximation for the distance to the tower is given by:

Here is a detail from a woodblock print from 1523 by Peter Apian, showing a person measuring the height of a tower using a Jacob's Staff. You can read more about Jacob's Staff and an example involving finding height when you know the distance to an object in the German version of Wikipedia: Jakobsstab. (You can use Google Translate for your own language.)

Below is the full Peter Apian woodblock print. We can see people measuring heights and astronomical distances. Note the spherical representation of the Earth, when this concept was still rejected by many in society. 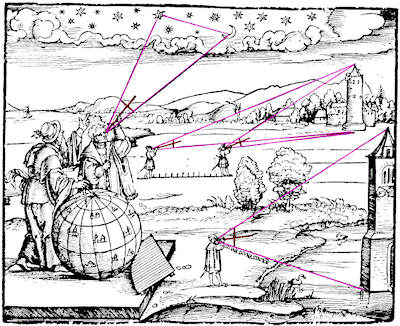 Math teachers could design an interesting practical lesson based on Jacob's Staff, by getting students to make some of them and then use them for measuring. Students would learn some history, as well as some math.