A lot of math (and science) is text-book driven, whereas it's often better to learn concepts as a result of observing and interacting with actual objects.

Make!Sense is a new product that helps to achieve this goal. Here's the developer's description:

I've found that students respond well to playing with such data loggers. It's hands-on and usually a lot more meaningful than worksheets.

[KickStarter is a crowd funding platform.
Disclaimer: I have no connection with this product.]

For some background on what this course is about, and to get an idea of the concepts involved, see:

Here's some good ideas from great teachers for the start of the school year.

5. KaTeX - a new way to display math on the Web

I think it's important to be able to communicate math concepts easily in online forums and other digital media. KaTeX is similar to MathJax in that it can display math without using images.

The puzzle in the last IntMath Newsletter asked about a rectangle whose perimeter equals its area. The correct answer with explanation was approached in 3 different ways by the following respondents:

In their answers, Nicos and Abby are talking about the graph of

(where x and y are the side lengths). Here's what it looks like (it's a hyperbola): 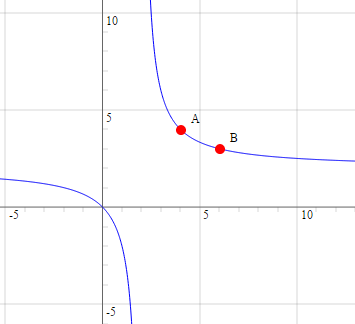 We don't use the lower-left arm of the hyperbola (which would give us negative lengths).

The point A on the graph is (4, 4), the solution which gives us a square. (But the question said it cannot be a square.)

The answer has to be near this point on the curve (the further you are away from this point, the bigger the rectangle becomes.)

Which one of the following represents the next in the series?

Salman Khan, well-known creator of the Khan Academy, has some great things to say in his article, "The Learning Myth: Why I'll Never Tell My Son He's Smart".

He talks about 2 ways of approaching learning, with either a fixed or growth mindset. Here's a quote:

Fixed mindsets mistakenly believe that people are either smart or not, that intelligence is fixed by genes.

People with growth mindsets [however], correctly believe that capability and intelligence can be grown through effort, struggle and failure. [They] embrace challenges, and understand that tenacity and effort can change their learning outcomes.

The take-home message is that we should praise effort, diligence and tenacity, not inherent skills.