It was my turn to host the 114th Math blog Carnival. I hope you find something interesting in the 16 articles there!

We live in a great age where it's possible to see a lot more in data that was ever possible before computers.

Prooffreader (by David Taylor) has some interesting data visualizations, including several displaying trends in baby names. The name "Shirley" sky-rocketed in the mid-1930s, and "Linda" even more so in the the late 1940s. "Brittany" and "Ashley" were hits in the late 1980s. There's an interesting animation of the rapid rise in boy's names ending in "n".

He also has some infographics on cancer and mortality rates.

One of the graphics that caught my eye was Graphing the Distribution of English, which demonstrates how letters are used in words in the English language.

For example, the image below for the first 2 letters indicates that "a" occurs mostly in the middle of a word, whereas "b" occurs mostly at the beginning. 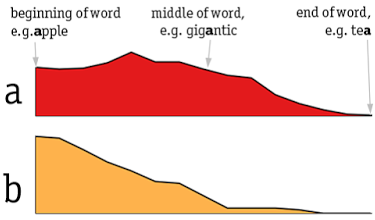 Go check out Prooffreader - there are some interesting things there.

The puzzle in the last IntMath Newsletter asked about a strange pyramid of ancient Egypt. The correct answer with explanation was given by Tomas and Nicos. The difference in their approaches was quite interesting.

New math puzzle: Find the smallest rectangle (non-square and with integer sides) where the perimeter equals the area (ignoring units).

This quote comes from Annie Murphy Paul. It's a summary of the Rothstein and Santana book, Make Just One Change: Teach Students To Ask Their Own Questions:

"This book makes two simple arguments: 1) All students should learn how to formulate their own questions. 2) All teachers can easily teach this skill as part of their regular practice. This inspiration for the first argument came from an unusual source. Parents in the low-income community of Lawrence, Massachusetts, with whom we were working twenty years ago told us that they did not participate in their children's education nor go to their children's schools because they 'didn't even know what to ask.' It turns out that they were actually pointing to a glaring omission in most formal and informal educational enterprises. The skill of being able to generate a wide range of questions and strategize about how to use them effectively is rarely, if ever, deliberately taught. In fact, it has too often been limited to students who have access to an elite education. Our goal is to democratize this teaching of an essential thinking and learning skill that is also an essential democratic skill."
—Dan Rothstein and Luz Santana, Make Just One Change: Teach Students To Ask Their Own Questions