These series expansions were incredibly useful when they were first developed by Newton, Taylor and Maclaurin in the 17th and 18th centuries, for their many uses in evaluating function values and in calculus.

Here's some background information so you know what's going on in the above applets:

Yes, it's that time of year again.

There are several ways to draw mathematical hearts. I quite like this one because it uses parametric equations, which are easier to deal with than implicit functions. 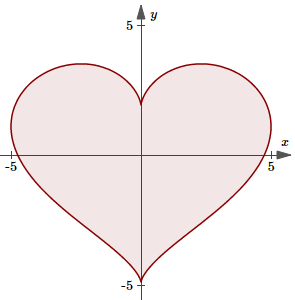 It's even simpler when you use polar equations.

1. Lethal dose of caffeine given to students in university experiment

The court was told about a catalogue of errors that led to the overdose, which included the calculation being done on a mobile phone, the decimal point being put in the wrong place and there being no risk assessment for the test.

The NVIDIA GPU (graphics processing unit) in your computer is making it possible to solve "systems of multiple simultaneous equations involving thousands to millions of variables" by making use of better and cheaper energy efficiency rather than memory.

"Small-scale ocean currents are fiendishly difficult to recreate in models, but we found that random numbers do a good job of standing in for them. This approach leads to significant improvements in our climate modelling abilities."

[Hat-tip to PiPo for the above stories.]

By Dominic's own admission, there are 3 errors in the map. Can you spot them?

The puzzle in the last IntMath Newsletter asked about the number of terms in a geometric sequence.

Correct answers with sufficient explanation were provided by Adeyemi, Aksel, Tomas, Don, and Eamon. (Honourable mention to Gerard who was very close.)

A square piece of metal is made into an open box by cutting a square with side s from each corner and turning up the sides. If the volume of the resulting box is v cm3, what are the dimensions of the original sheet of metal?

Bonus: If we needed to make a closed box out of the same piece of metal, what would its maximum volume be?

When I was in northern India recently, visibility on each smoggy morning was often only a few meters. I was reminded of what ocean explorer Jacques Cousteau once said:

Water and air, the two essential fluids on which all life depends, have become global garbage cans. [Jacques Yves Cousteau]