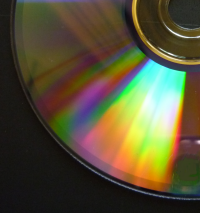 In PCM recording hardware, a microphone converts sound waves into a varying voltage. Then an analog-to-digital converter samples the voltage at regular intervals of time. For example, in a compact disc audio recording, there are 44100 samples taken every second.

The data that results from a PCM recording is a function of time. How does this work?

Imagine that you were very small and could fit into your friend's ear drum. Suppose also that you could see things in very slow motion and that you could record the position of the ear drum once every 44100th of a second. Your eyes are so good that you can notice 65536 distinct positions of the ear drum's surface as it moves back and forth in response to incoming sound waves.

If your friend is listening to the sound of a flute, and you write down the positions of the ear drum that you notice, then you would have a digital PCM recording - a series of numbers.

If you could later make your own ear drum move back and forth in accordance with the thousands of numbers you had written down, you would hear the flute exactly as it originally sounded. We have gone from:

To be able to convert from the series of numbers to sound, we need to apply the Fourier Transform.

2. Frequency Information as a Function of Time

One analogy for the type of thing a Fourier Transform does is a prism which splits white light into a spectrum of colors. 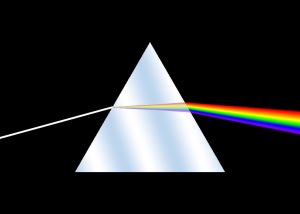 White light is split into individual frequencies by a prism

In our inner ears, the cochlea enables us to hear subtle differences in the sounds coming to our ears. The cochlea consists of a spiral of tissue filled with liquid and thousands of tiny hairs which gradually get smaller from the outside of the spiral to the inside. Each hair is connected to a nerve which feeds into the auditory nerve bundle going to the brain. The longer hairs resonate with lower frequency sounds, and the shorter hairs with higher frequencies. Thus the cochlea serves to transform the air pressure signal experienced by the ear drum into frequency information which can be interpreted by the brain as tonality and texture.

As we saw earlier in this chapter, the Fourier Transform is based on the discovery that it is possible to take any periodic function of time f(t) and resolve it into an equivalent infinite summation of sine waves and cosine waves with frequencies that start at 0 and increase in integer multiples of a base frequency `f_0= 1/T`, where T is the period of `f(t)`. The resulting infinite series is called the Fourier Series:

The job of a Fourier Transform is to figure out all the an and bn values to produce a Fourier Series, given the base frequency and the function f(t).

If you process these `1024` samples with the FFT (Fast Fourier Transform), the output will be the sine and cosine coefficients an and bn for the frequencies

Let's say that we use the FFT to process a series of numbers on a CD, into a sound.

So the Fourier Series would be: 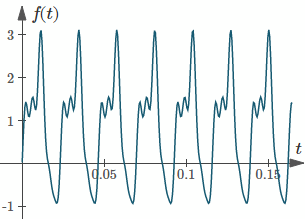 We have reconstructed a sound wave from the digital data fed from the CD into the sound system of the CD player.