When we first came to Singapore, we were worried every time we got into a cab. The skills of the drivers were, to put it kindly, patchy.

But the kicker was that safety belts were always tucked out of the way below the seats. If you tried to retrieve the seat belt, you would be up to the armpits in the grunge that had settled between the seat base and the back. There was always a dilemma - do I arrive at my destination looking and smelling like I had been inspecting cow's bowels, or should I risk certain death on the PIE (the Pan Island Expressway)?

Anyway, things improved markedly a year or so ago when the police finally started to crack down on errant drivers and their passengers. You see, it has been law all along that all occupants should wear safety belts:

There has been a noticeable change in the habits of most people about wearing belts. (This is known as the "Fine City" after all - no-one talked about safety much - it was the fear of a fine that moved the masses.)

However, a lot of the taxi drivers do the following trick. They put a clip on the belt to hold it against the spring tension. 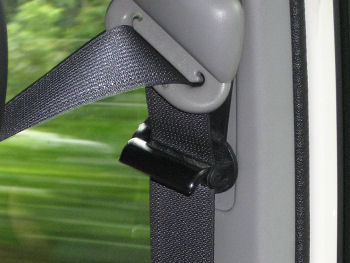 Then they leave the belt unsecured and dangling. 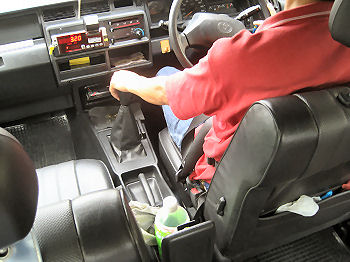 Just in case you can't see the detail: 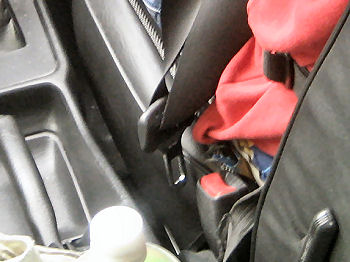 The driver in the photos was in charge of SMRT taxi SHB1203U yesterday at around 11:00 am.

If he has no regard for his own safety, how can I trust him with mine, and my family's?

Does it matter? You bet, it matters. Safety belts save lives and reduce injury, especially to the face, chest and knee. (Check out Head Injury Criterion for some mathematics on this topic.)

You can always tell when a driver puts safety first. Unfortunately, there are not as many safe drivers as there should be.

Footnote 1: Almost every taxi in Singapore displays the registration plate number and the driver's name prominently inside the cab. But this one did not. Hmmm - what does that tell you?

Footnote 2: Notice that I use the term "safety belt" rather than "seat belt" - it is more indicative of the purpose of the device.

Update (19 Mar): I got a phone call from the taxi company. Having investigated the incident, they indicated that he should have been wearing his belt and he should have displayed his name and license in the cab. They apologised to me, and I am satisfied with the outcome.

They asked me to remove this post, but I replied that I would not be prepared to do that. I am happy that they have acted on my report and that they care.