Ellipses and crowd safety at the Hajj

During the week of Hari Raya Haji, I thought it would be interesting to point out how crowd safety at the Hajj was improved using ellipses.

The Hajj is the annual pilgrimage to Mecca. Hari Raya Haji is celebrated at the end of the pilgrimage on the tenth day of the last month of the Muslim calendar. (In 2007, this falls on 20th December.)

One of the rituals (Ramy al-Jamarat, or 'stoning of the devil') involves 3 stone pillars. Pilgrims are required to throw 7 stones at each pillar. (This symbolises the 3 times that Abraham refused the devil's taunts over the sacrifice of his son.)

With 2 million pilgrims attending the Hajj and with several serious fatal incidents arising from inadequate crowd control, in 2004 Crowd Dynamics Ltd was consulted to improve the situation.

Originally, the walls surrounding the stoning pillars were circular with a small radius (the dots on the Jamarat Bridge are people):

As pilgrims surged around the pillar and tried to throw stones, the situation could easily become chaotic and very dangerous.

So the company suggested that the walls surrounding the stoning area should be elliptical:

Stoning wall in the shape of an ellipse

The above image is from a computer animation of the effect of using ellipse-shaped barriers. The dots are people and the colour represents people densities.

Footnote: To get an idea of the crowds in Mecca, check out this traffic scene: 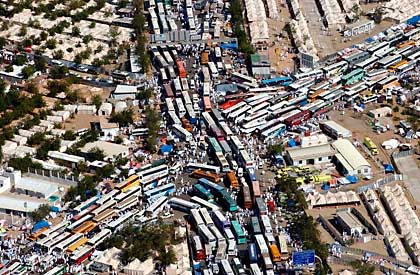 One Comment on “Ellipses and crowd safety at the Hajj”