In this section we'll see an example of the average value of a function. Our aim is to find the Head Injury Criterion, a measure of damage to the head.

In the 1950s, cars were efficient killing machines. There were no such things as airbags, safety belts, anti-lock breaking, crumple zones or plastic knobs. Ralph Nader pressured car manufacturers in the 1960s and 1970s to produce safer cars - and it worked.

Normal braking in a racing car: 50 ms-2 (or about 5 g). This is due to aerodynamic styling and large tyres with special rubber.

When we stop in a car, the deceleration can be either abrupt (as in a crash), as follows:

or more gentle, as in normal braking:

Either way, the area under the curve is the same, since the velocity we must lose is the same.

But in a crash, the car stops in about 150 ms and the life threatening deceleration peak lasts about 10 ms.

Crash test experiments include the use of dummies, dead bodies, animals and boxers!

The Mercedes Benz company has been a world leader in car safety, and has conducted many crash tests involving dummies, with the aim of reducing injuries for humans.

Our head is like a pendulum and so it's the most vulnerable part of our body in a crash. In cars without an airbag, the deceleration is quite violent and lasts a very short time.

The Head Injury Criterion (HIC) is very high in such cases, indicating that the occupants' heads will be injured. (We'll see how to calculate the HIC on the next page.)

The A-3 ms value in the following graphs refers to the maximum deceleration that lasts for 3 ms. (Any shorter duration has little effect on the brain.)

If an airbag is present, it will expand and reduce the deceleration forces. Notice that the peak forces (in g) are much lower for the airbag case.

The blue rectangles in these deceleration graphs indicate the most critical part of the deceleration, when the maximum force is exerted for a long duration.

With an airbag, you are far more likely to survive the crash. The airbag deploys in 25 ms. 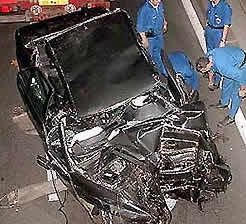 This photo was taken just after the car crash in 1997 that killed all occupants, including Princess Diana.

Notice how the front crumple zone of the Mercedes did its job while the cabin retained its shape. Unfortunately, it was not enough to save her.

Crumple zones absorb impact forces, so that deceleration is reduced, an in turn, injury is reduced.

A model to describe head injuries

We aim to describe the risk of head injury in a crash by a number.

The two main approaches are the Severity Index and the Head Injury Criterion.

The first model developed historically was the Severity Index (SI).

It was calculated using the formula:

T is the duration of the deceleration during the crash; and

a(t) is the deceleration at time t.

The index 2.5 was chosen for the head and other indices were used for other parts of the body (usually based on possibly gruesome experiments on human or animal bodies).

The Severity Index was found to be inadequate, so researchers developed the Head Injury Criterion ».

Jason Padgett was attacked and savagely beaten. He had severe concussion, but an amazing new ability to "see the world through the lens of geometry". Read more »

Applications of Integrations #11 by Kabookiep [Solved!]

How to transform the differential equation? by zhangyhui [Solved!]

A simple integration by zhangyhui [Solved!]