Water from the air using windmills

A promising Australian invention extracts water from the air using a sustainable energy source - the wind.

Phillip Adams, of The Australian newspaper writes about the Whisson windmill in "Water from Wind" (unfortunately, no longer available):

There’s a lot of water in the air. It rises from the surface of the oceans to a height of almost 100 kilometres. You feel it in high humidity, but there’s almost as much invisible moisture in the air above the Sahara or the Nullarbor as there is in the steamy tropics.

Usually a windmill has three blades facing into the wind. But Whisson’s design has many blades, each as aerodynamic as an aircraft wing, and each employing “lift” to get the device spinning. I’ve watched them whirr into action in Whisson’s wind tunnel at the most minimal settings.

The windmill includes a water condenser system based on an African insect’s method of obtaining water - it just presents its body head-down into the wind and water runs right off its body into its mouth.

From the journal Nature:

This insect has a tailor-made covering for collecting water from early-morning fog. Some beetles in the Namib Desert collect drinking water from fog-laden wind on their backs. 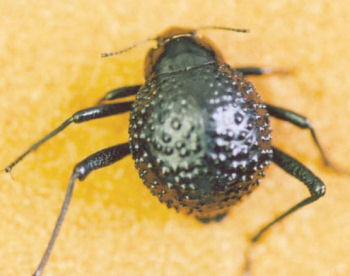 Governments should make huge investments into this kind of technology. Already there is a vital need in many countries to extract clean water using sustainable (that is, not using fossil fuels) energy.

Max Whisson has such a solution. 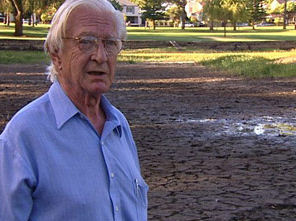 Max Whisson on a dried out lake bed in Western Australia. Image source

Here’s a brief animation showing the concept. (There is no sound.)

You can see a video on Max Whisson’s windmill from Australia’s ABC TV.

There are quite a few naysayers commenting about this invention. For example, in the ABC’s forum, we read:

Based on the show and the information on the Water Unlimited website he’s claiming that a 4 square metre unit will produce 6300 litres of water a day for 15 km/h winds.

A very good de-humidifier requires 0.36 kWh per litre, so the *best* we can expect from one of these devices is less than 7 litres of water a day.

And then there’s Major Malfunction in The Age, who says:

I’ve done some calculations according to Whisson’s own yield estimates and the laws of physics, and yes... The power required (for the small unit) is in the megawatt range.

Damned reality. Always getting in the way of a good idea...

So there’s a challenge for you mathematicians and physicists. Will this work, or is it another good idea doomed to failure?

2 Comments on “Water from the air using windmills”