I promoted and participated in Blog Action Day: the Environment.

But I'm having second thoughts about the effectiveness of the exercise.

Sure, there was a lot of interest and support for the day. From Nielsen Buzzmetric's Blogpulse, we saw a surge for the topics "Blog Action Day" and "the environment".

However, one definition of the success of the event would be an increase in interest concerning the environment.

Technorati shows a declining trend in posts about the environment, which continued after the Oct 15 spike. 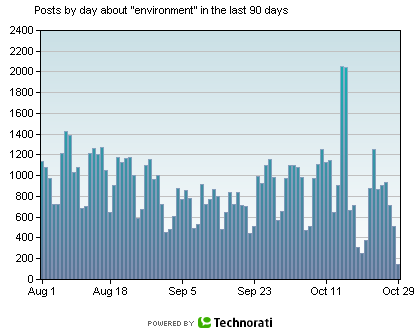 So maybe it was another exercise like the recent music festival for the environment that resulted in tonnes of garbage left in most venues where it was held.

I'm all in favour of events that raise consciousness - but the best thing we can do is change our day-to-day activities.

So go sell that SUV and work from home...