Google has scanned over 15 million books, and they've released a subset containing 500 billion words from 5.2 million books. The best thing is htey have made the whole database freely available.

You can search the Google Books Ngram Viewer to see how words have changed in popularity through the years. 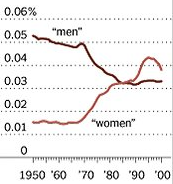 The graph shows how the word "men" dominated books up until the feminist 1970s, when the word "women" started to take over. By 1985, you can see "women" were on top. [Image source]

However, when you compare "man" and "woman", the fairer sex has a long way still before dominating mentions in books.

A tale of 3 empires

Here is a comparison of the words "America", "England" and "China" as used in English-speaking books throughout the 20th century. It shows how England's influence waned, America's ascended (especially during the war years) and how China's has remained fairly constant since the 1940s. 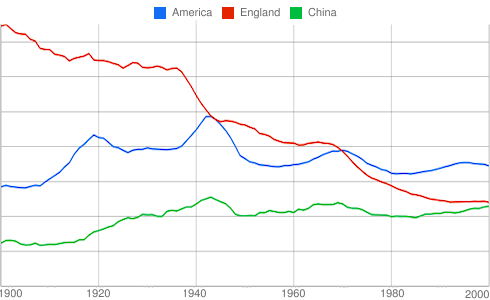 Notice that searches on the Ngram Viewer are case sensitive. I originally (mistakenly) compared "china", "america" and "england" (all lower-case) and of course, "china" was at the top by a significant margin, since this refers to the pottery.

While these searches are really interesting, we need to ask: