Website owners tend to be somewhat obsessed with stats concerning their own site(s). It is very interesting to see where vistors come from and where they go on the site.

I had ClustrMaps on Interactive Mathematics for a while. ClustrMaps keep track of what country your vistors are coming from and produces an interesting map showing countries from which visitors are concentrated.

Not surprisingly, the US is the source of the majority of visitors:

According to ClustrMaps, the dots represent the following number of visitors:

The paucity of visitors from Africa says a lot about population density in the Sahara region (low) and the number of Internet users in Africa (also low). 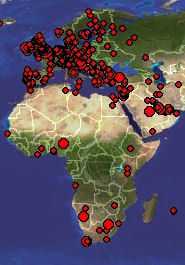 The big blob for Singapore in the Asia/Asutralia portion is not surprising, as the second highest number of visitors is from Singapore. In third place is Australia. 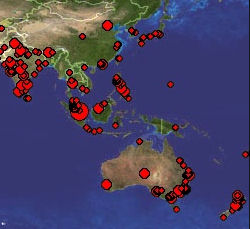 I was intrigued with the large dot in outback Australia (very near Uluru, aka Ayers Rock). I assure you, there would be very few visitors from there. I suspect ClustrMaps could not identify the city for those users, and just plonked them in the middle somewhere.

The number of visitors does not tally all that well with the other counters I use on my sites. Quite possibly they are ignoring repeat visits from sites if the repeat is within a day, or whatever. Each set of Web stats is telling a similar, but different story.

All statistics requires further thought, interpretation and analysis. Don't ever believe someone who says "the statistics show that...". Stats only give an indication of what is going on - they cannot be relied on totally.

I'll be removing ClustrMaps soon - check it out before I do.