The world population is estimated to reach 7 billion next week - on 31st Oct 2011.

I have updated the interactive which shows up-to-the-second population estimates. It no longer uses Flash so it will work on more mobile devices.

You can choose different dates through history (and in the future) and get a sense of the population growth. 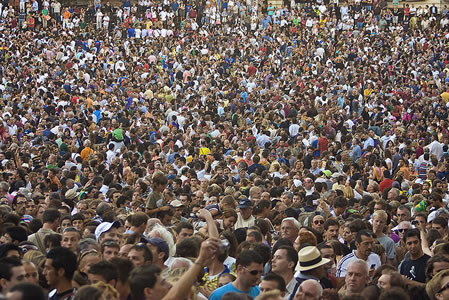 It's just an estimate...

Other population estimates are lower than the UN estimate.

They also point out the population growth rate is currently 1.092%.

According to the United Nations (page no longer available), the growth rate in the most developed countries is 0.3%, while in the least developed it is 2.3%.

Where to from here?

Current trends are inevitable - the developed countries will continue to struggle with low birth rates and populations will begin to decline (this is already the case in Japan). The ratio of working-age to retired people will increase, resulting in a greater taxation burden for the workers.

The developing countries will have higher birth rates for quite some time, resulting in large numbers of (restless) young people. One key to improving their future will be education, especially for women.

4 Comments on “7 billion people next week”