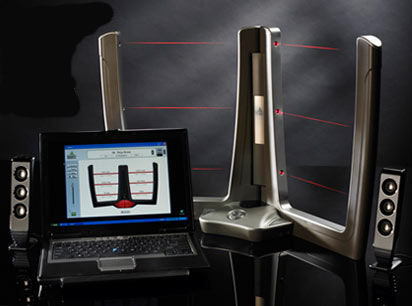 From Reuters (link no longer available):

[The Beamz is a] pioneering invention that allows people to make music by interacting with light and sound. [It was] created by accomplished musician and songwriter Jerry Riopelle.

Apparently Riopelle was inspired by a light-activated door announcer at his local ice cream shop.

His years of tinkering resulted in a breakthrough product that uses six laser beams like strings. Players simply pass their hands through each beam to trigger streams of musical notes or sounds. Each performance produces an original composition
and the patented software ensures that the music played always will be harmonious, no matter which beam is engaged.

Similarities with The Theremin

The Beamz reminds me of the theremin, an early 20th century instrument that consisted of 2 antennae. Theremins have been used in many popular songs. From Wikipedia:

To play [the theremin], the player moves his hands around the antennas, controlling frequency (pitch) and amplitude (volume).

And that, folks, is where the mathematics is embedded in this story. See more on music frequencies and amplitude. 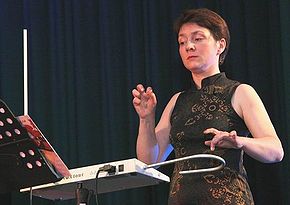 The Beamz is a sophisticated re-visit of the theremin concept.

And now, the movie

Here's a performance using the Beamz.

In closing, from Riopelle:

"We all know that playing music is an uplifting experience, but not everyone thinks they have musical ability," Riopelle says. "The beauty of the Beamz is that it allows anyone, regardless of experience or talent, to easily approach making music. It unleashes their creativity and leads them to their inner musician. Accomplished musicians will especially enjoy exploring this new form of interactive music."