The murderous math teacher of S-21

The high school compound is quiet and peaceful. This is a neighborhood school, but lately there have been no neighbors, no teachers, and no students. 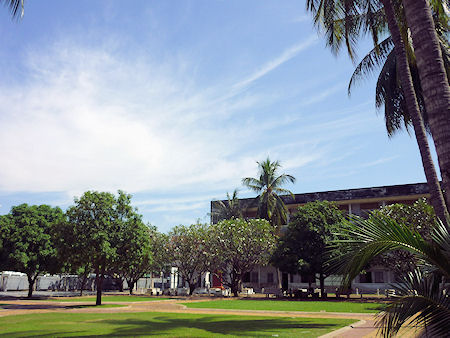 The whole city is quiet, since everyone has been sent out to the countryside in a weird "agrarian experiment". Everyone, whether they are teachers, bankers, artists or tuk-tuk drivers must now dig in the fields and grow rice. No one is left in the city. No one is spared, but that's all about to change.

The high school is being renovated. It's not to make things better for students, but to make it more convenient to inflict inhumane cruelty on hapless prisoners.

Classrooms are being modified by the construction of crude cells out of brick or timber. These will house prisoners who will suffer a hell of torture and torment, before eventually being taken to a nearby field and clubbed to death. 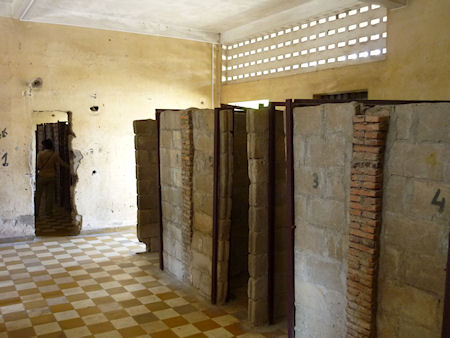 Manacles are brought in, ready to constrain the 20,000 prisoners who will pass through this terrible place. 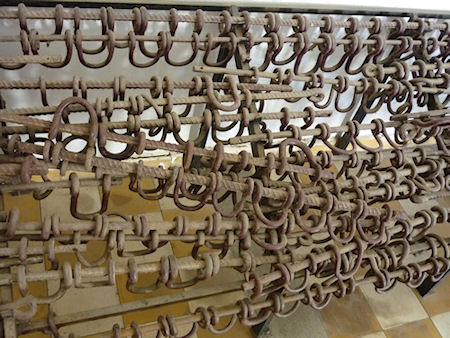 The first group of prisoners arrives by truck. Their crime? In many cases, they were arrested because they had the misfortune of being born in the wrong place or belonging to the wrong family, and being seen as potential traitors.

First stop is the photograph room, where each prisoner is assigned a number. This poor victim's number tag is crudely pinned to his skin. 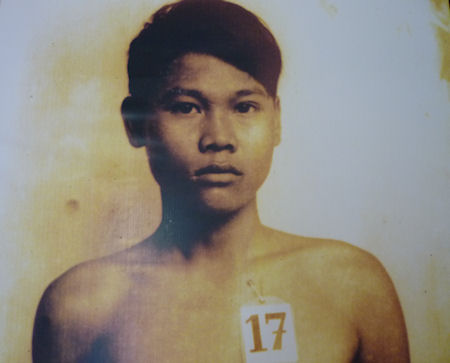 This exercise pole which used to keep young bodies healthy, is now the scene of unbelievable suffering. 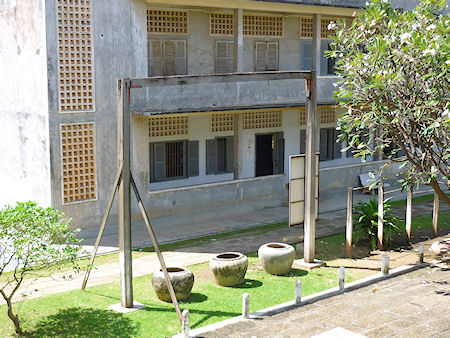 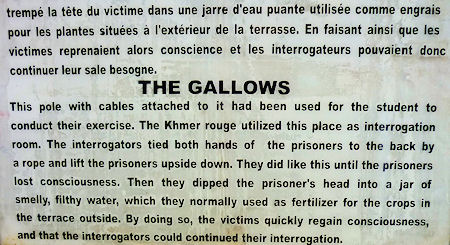 Water-boarding was a common way of extracting "confessions". The prisoner was shackled by the feet at the higher end of the table and by his hands at the lower end. Water was poured onto his nose and mouth causing a drowning sensation. 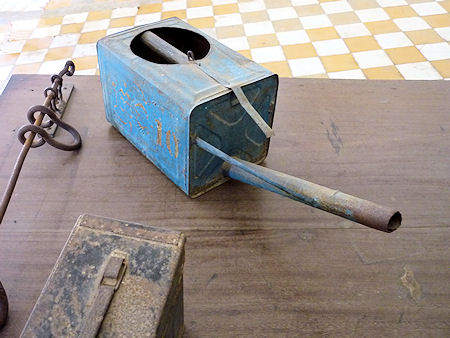 Starvation and sleep deprivation added to the misery. 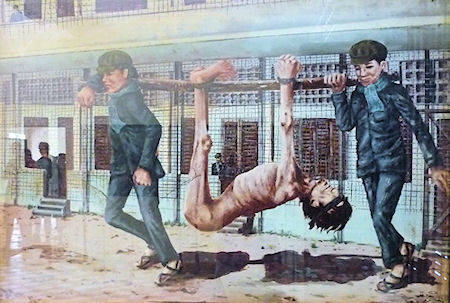 The prisoners who died during interrogation were photographed before their bodies were carted off in trucks. 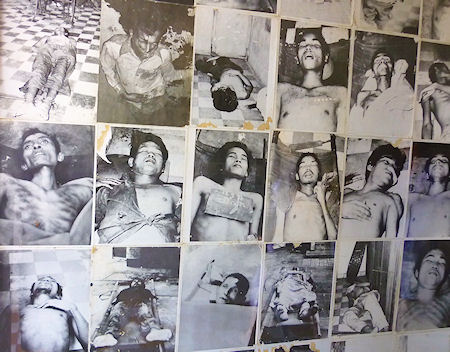 And who was running this terrible place? 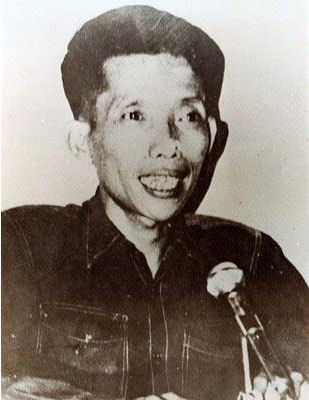 Duch was an excellent math student, scoring second place in the Cambodia Baccalaureate in mathematics. He became a math teacher in 1966 and was a "good teacher. remembered as earnest and committed by his pupils".

After joining the Communist Party of Kampuchea (before the Khmer Rouge took over), he was arrested and tortured in prison because of his communist leanings. What a tragedy that he carried on such inhumane acts in his own institution, while in charge. This presumably became his "new normal".

He converted the Tuol Svay Prey High School into a place of brutality and cruelty. At the time, Cambodia had descended into a paranoid madness, modeled after the Cultural Revolution in China.

After the Vietnamese army invaded Cambodia and threw out the Khmer Rouge in 1979, Duch escaped to the Thai border, where he taught mathematics. He was a "good teacher, but one with a fiery temper."

I recently visited the Tuol Sleng Genocide Museum, which is at the site of the S-21 Tuol Sleng Prison. (All photos are mine.) 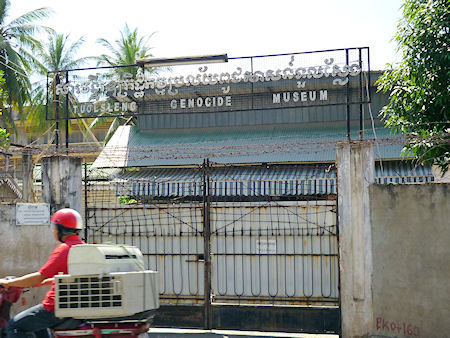 It was a deeply moving experience. There is so much tragedy in Cambodia's story but this is one onf the worst excesses of the period. The guards at this torture prison were often in their late teens. Here was a facility that was originally built to educate such people, but through collective madness, it was turned into hell and they were involved in perpetuating that hell.

One of the worst aspects of the "Democratic" Kampuchea period was that educated people were targeted for removal. A whole generation of teachers was killed, either through hard manual work, starvation, torture or execution. This has made the reconstruction of the country that much harder.

And yet, amongst the young people I met in Phnom Penh, there is a wonderful and refreshing thirst for knowledge. This bodes well for Cambodia's future.

I'm looking forward to doing some volunteer work in Cambodia over the next few years. There is certainly much to be done.

I am disgusted to this day that waterboarding in US-run prisons was considered "acceptable" during the Bush years. Torture dehumanizes all those involved and rarely justifies the meagre outcomes.

2 Comments on “The murderous math teacher of S-21”