The object with finite volume but infinite surface area

Here's an interesting paradox. I have a hollow object which has infinite height. I can fill the object with paint, but if I try to cover the surface with that paint, there won't be enough.

How can this be?

According to some, the archangel Gabriel (shared by Judaism, Islam and Christianity) is expected to blow a horn to indicate the last days are upon us.

The mathematical paint paradox involves the volume and surface area of a 3D object resembling Gabriel's horn in this picture. 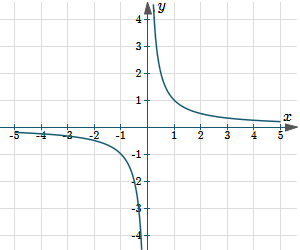 We choose the right-hand portion (to avoid the discontinuity at x = 0) and plot the graph starting at x = 1. We consider the (infinite) shaded area to the right of the dashed line, below the curve and above the x-axis. 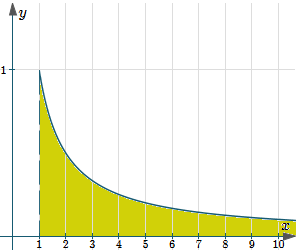 We rotate that area in 3 dimensions around the x-axis and end up with an (infinitely long) horn-like object. 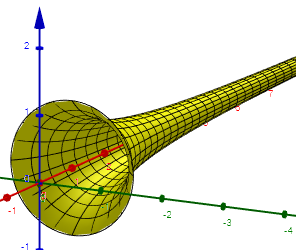 Volume of the horn

y is the curve we rotate around the axis, in this case 1/x

So in this case, our volume will be as follows (I'm retaining b as the upper limit since we can't substitute ∞ - we'll need to consider limits instead): 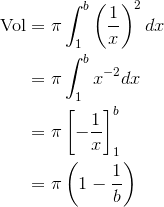 As b gets larger and larger, the final fraction in our answer gets smaller and smaller, so the volume is a finite quantity, π.

In mathematical notation, we would write this as:

Next, let's consider the surface area of the horn.

The formula for the surface area of a solid of revolution is:

y is the curve we rotate around the axis

dy/dx is the derivative of y

In this case, we have: 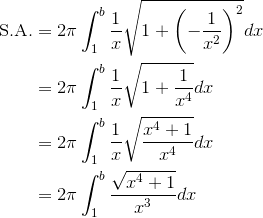 If we consider the value of the fraction

as x gets very large, we can see it will get very close to 1/x (but will be just a little bit bigger than it).

So we can conclude that:

Now as b gets larger and larger, this quantity also gets larger. That is, it is an infinitely large quantity. 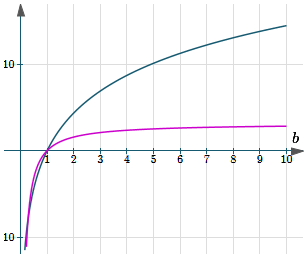 So if we try to paint the outer surface with our π liters of paint, it will quickly run out.

So how can it be that we have a finite volume, but an infinite surface area?

One way of looking at it is to recall how a volume of solid of revolution is actually calculated using integral calculus. We are finding the sum of the volumes of an infinite number of disks, radius y (for different values of x). The disks have area

and infinitesimal height dx. So each disk has volume

The sum of an infinite number of such disks will converge, since this general sum converges:

The paradox about an object having finite volume but infinite surface area caused a lot of dispute regarding the nature of infinity among mathematicians of the 17th century, including Galileo and Wallis. Such paradoxes are a great way to get us thinking!