Frequency of notes on a piano - interactive learning object

An interesting mathematical challenge for musicians throughout the centuries has been the issue of tuning instruments so they sound good when played together. Pythagoras and his followers worked on such problems over 2500 years ago.

For stringed instruments (like violin or cello), this is not such a big concern, because slight changes in finger position can produce a pleasing sound.

But for keyboard players, such flexibility does not exist. They have to hope their piano tuner can get things just right.

All the other notes are actually slightly "off" - a compromise so that pianos can sound OK when playing in any key. This is due to the oddities of exponential growth and equal-tempered tuning.

You can read more on the background of this at: What are the frequencies of music notes?

The new applet follows on from the above considerations and allows you to explore the graphs of piano note frequencies. There is a virtual piano that you can play (one note at a time) and after playing each note, you can see the graph of that note and its frequency.

You can find the new applet here:

Frequencies of Notes on a Piano: Learning object

You can also see a composite signal, which is the sum of the fundamental note A-220 and the note just played. 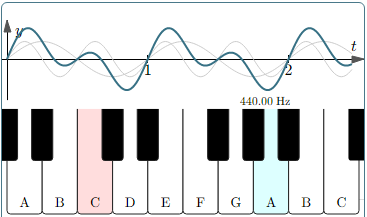 You can see the green curve is not exactly passing through exactly t = 2. As the frequncies get higher, it becomes increasingly "off".

This was unacceptable to many musicians during the Baroque era, and they would use other tuning methods to make sure the major 3rd sounded better. The downside was they couldn't play in certain other keys at all.

In the applet, you can also see the combined signal of the fundamental (A-220 in this case), with the note just played.

These two notes are right next to each other on the piano, and sound discordant (bad) when played together. The combined signal gives some insight why. You can see a regular combined signal which is very close to the original two (grey) signals, resulting in "beating" - a kind of shimmering which is not always pleasant. (It can be put to good use in music, but that's for another discussion.)

The major 3rd is one of the most common and "pleasing" sounds in music. On a piano tuned by equal temperament, however, you can see the 3 curves doen't line up so well (the grey A-220, C#-275 and the green combination of the two) because actually, C# is 277.18, which is too sharp for a totally pleasing sound.

It can't be helped if pianos need to play in any key (which of course, they nearly always need to do).

Once again, here's the link to the applet:

Frequencies of Notes on a Piano: Learning object