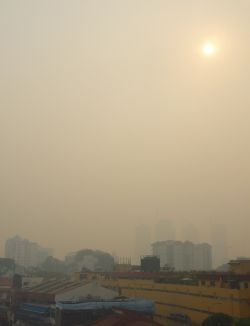 As I write this, my adopted city of Singapore is shrouded in a dangerous smoke haze.

From June to September each year, during the south west monsoon, much of Southeast Asia is hot and dry (unlike the northeast monsoon which brings wet weather).

Traditionally, the dry season was the time when Indonesian farmers would use slash and burn techniques to clear rainforest to produce farming land. Farmers still do that, even though it is now illegal.

But the bigger problem is the palm oil producers. Palm oil is used in many products, including baked goods, confectionery, cosmetics and cleaning agents.

Huge swathes of old growth rainforest are cleared each year for the monoculture palm oil plantations, causing immeasurable environmental harm, not only directly for the people afected by the toxic smoke haze, but also for the loss of biodiversity and increase in CO2 in the atmosphere.

On Friday 21 Jun, the 3-hour Pollution Standards Index (PSI) in Singapore hit a record high of 401, well into the "Hazadous" range as identified by the United States Environmental Protection Agency.

Where does this PSI figure come from?

The Pollution Standards Index is based on standards set by the US Environment Protection Agency. The index is a number representing the the highest concentration of 5 common pollutants averaged over a 24-hour period.

According to the WHO, particulate matter (PM) is the one we should worry about most:

PM affects more people than any other pollutant. The major components of PM are sulfate, nitrates, ammonia, sodium chloride, carbon, mineral dust and water. It consists of a complex mixture of solid and liquid particles of organic and inorganic substances suspended in the air.

The smaller PM2.5 particles (or those with an aerodynamic diameter smaller than 2.5 µm), ...

... are more dangerous since, when inhaled, they may reach the peripheral regions of the bronchioles, and interfere with gas exchange inside the lungs. [Source]

Any amount of particulate matter should be avoided, since it can lead to lung infections and lung cancers.

Calculation of the PSI

Singapore's National Environment Agency provides some information on the Computation of PSI (PDF).

Let's look at the PM10 case, as that is the predominant pollutant during haze periods caused by forest fires.

Here are the values given in the table in the NEA article for various PM10 readings and their corresponding PSI value.

As we observe in the following graph, the PM10 concentrations are not in an exact linear relationship with the PSI number. There are several linear segments. (Actually, the second row of the table is redundant.) 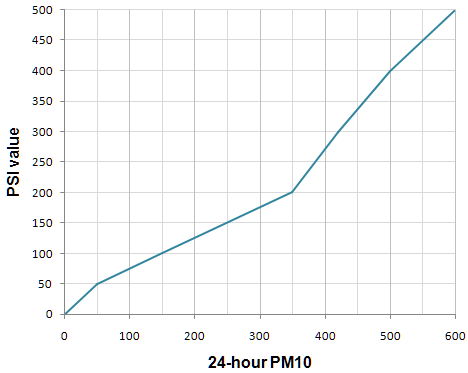 According to the PDF, the sub-index for a particular pollutant is calculated as follows: 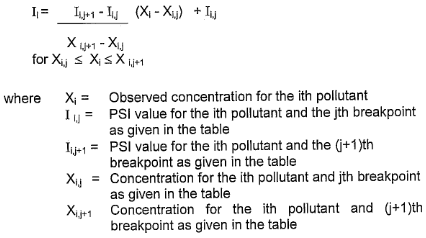 Let's look closer at the example they give in the short article. Consider the case where the 24-hour average of PM10 pollution is found to be 283 μg/m3.

The NEA perform the following linear interpolation step to get the PSI sub-index number.

If you are not sure what is going on here, this is equivalent to finding the equation of the line through the endpoints of the segment, which in this case are (150, 100) and (350, 200), and then substituting in the given value of 283.

To find the equation of the line segment, we use the formula:

After some algebra, this gives us the line through the given points:

Substituting the given value x = 283 gives us:

It's even easier to see what is going on in a graph. Here is what the above 2 processes are doing for us. We have an observed value 283, and we read off the graph the answer of 167. 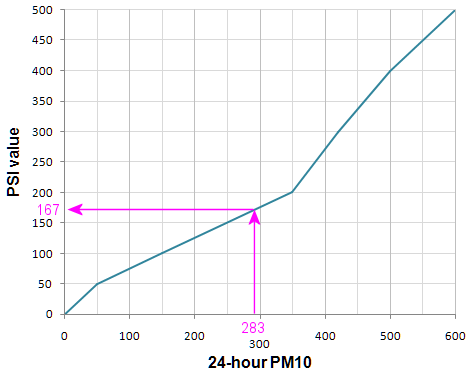 The above is done for each of the 5 pollutants measured (with their own respective linear segments), and the maximum of the 5 sub-indices is taken as the PSI for that period.

The PSI is really an attempt to provide a number that can be used for health advisories, such as the following:

The linear segments used for each of the 5 pollutants is an attempt to equate the health effects of the pollutants. 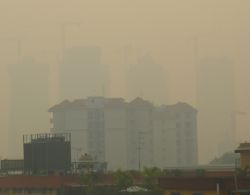 During the 1997 haze period, Singaporeans were confused by "24-hour PSI" readings that didn't seem to correlate with observed visual pollution. The 24-hour reading is used throughout the world since health risks increase with prolonged exposure.

Notwithstanding, Singapore's NEA began to publish 3-hour readings (and now they are at pains to convince people that they should only concern themselves with the longer time period index, since that is what the health advisories are based on).

See Air Quality Index for information about the similar, but slightly different air pollution indices used around the world.

4 Comments on “Math of air pollution”