There are huge imbalances between the wealth of the rich, and the poverty of the 4 billion souls who are earning less than $2 per day. 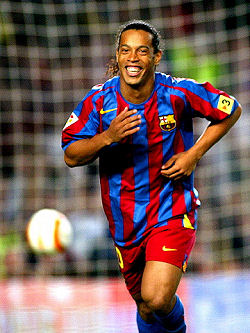 The salaries of golfers, footballers, cricketers, movie stars, Wall Street financiers and corporate chiefs are rather immoral, especially when you think about the recent rapid increase in the number of poor in the world due to rising energy and food costs.

According to Bloomberg (source has disappeared), the top football players recently earned in salary and endorsements:

In US dollars, Ronaldinho is getting around $30 million — for kicking a ball around a grassy field. That's about $14,400 per hour, assuming that he does around 40 hours of 'work' per week (training, playing football and smiling for cameras) and doesn't take a holiday. Not bad.

Meanwhile, the $2-per-day-poor are earning 33 cents per hour, assuming they 'work' the same number of hours per week. Unrealistic comparison I know, but there's something very wrong with this.

In Bart's $11m scientology d'oh-nation [in News, no longer available], we read about one of the voice talents in The Simpson's, the popular TV show.

THE voice of Bart Simpson last year handed a stunning $11.2 million over to her beloved Church of Scientology - twice as much as Tom Cruise.

Nancy Cartwright, 50, made the donation as part of Scientology's Global Salvage effort, which aims to "de-aberrate" Earth - meaning to rid mankind of psychology ills and other "aberrant" behavior.

Cartwright can certainly handle the financial blow. She's been earning $280,000 an episode on The Simpsons since 2004.

Now let's turn to the young, fresh graduate teacher that I met in Cambodia recently. He was heading out to teach in some remote place in the hills, and his starting salary was US$40 per month. So that's only just $1.33 per day and this represents maybe 20 cents per hour.

Yes, I know we value different things in different cultures — and we are willing to pay for what we value. But what value is there in having 2/3 of the world living in abject poverty? How can that be sustained? Is Ronaldinho really worth 72,000 times as much as the Cambodian teacher, who is doing far more to reduce poverty and give hope to poor villagers?

Poverty is a global problem and needs global solutions. The next President of the USA must regard poverty reduction as a high priority and he needs to ensure the removal of trade barriers and farm subsidies that help to keep the poor, poor.

And maybe we need to re-look at the commercial system that allows football clubs to "buy" stars like Ronaldinho for such ludicrous amounts.

I live in hope.