Is the Gateway Arch a Parabola?

The Gateway Arch in St Loius, Mo., USA, is part of the Jefferson National Expansion Memorial.

The shape of the arch certainly looks like a parabola, but is it? 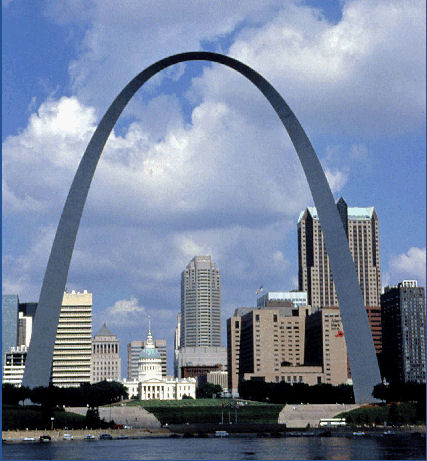 We'll model the arch using a parabola and see how well it fits.

I drew a set of x-y axes and a regular grid on top of the photograph.

Next, I determined the values of y for x ranging from -3 to 3 (using a much finer grid than the one shown). We can see the resulting points (in magenta color) in the next image. Note the points are along the (approximate) center line of the arch (not the inner or outer edge). 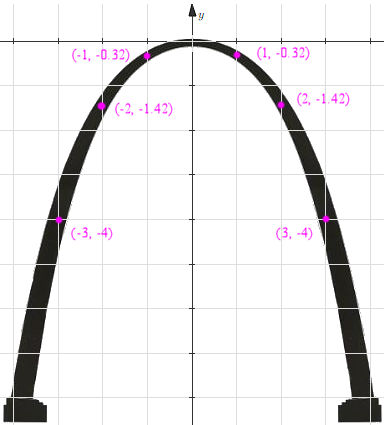 I know the equation for my parabola will have a negative in front, since it is inverted (upside-down).

I can find the equation for this parabola in several different ways. One is to recall the general form for a parabola:

We have 3 points and 3 unknowns, so we just substitute them in:

Substituting this back into either (1) or (2) gives:

So the parabola we are looking for is:

Here is the graph of that parabola.

Comparing our parabola to the photo, we can see (especially near the waterline at the bottom) the shape of the arch is not really a parabola at all. 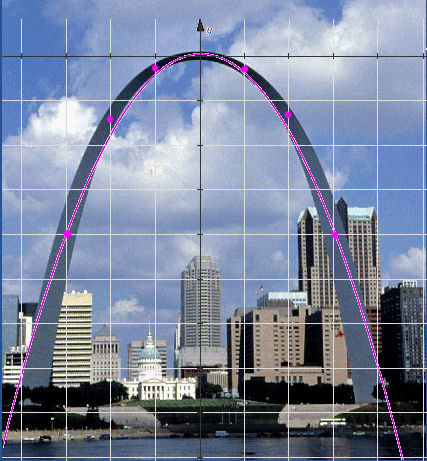 The Finnish-American designer of the Gateway Arch, Eero Saarinen, knew that a parabola was not the best shape for such an arch.

Arches have been used throughout history for bridge and roof supports, since they are good at directing forces downwards, rather than outwards, thus reducing the chance of collapse.

An arch shape that is often used is the catenary.

A catenary is the shape made by a chain that is freely hanging between 2 supports. 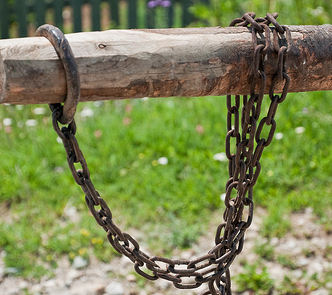 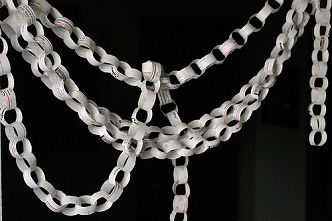 A simple example is:

Here are the two curves on the same set of axes.

We add the y-values of the 2 exponential curves together and divide by 2 (in other words, we find the average of the y-values) to give us our simple catenary (in black) .

We see they are not quite the same, and perhaps we are getting somewhere.

This is not important for this discussion but there is another way of writing the equation we've just been discussing.

This is an example of a hyperbolic function and you may meet the notation cosh later. It is called "cosh" because in some ways, it behaves similarly to the "cosine" function from trigonometry. The "h" in "cosh" comes from "hyperbolic".

Back to the topic.

Now, a catenary is the shape we see when there is a chain of constant thickness hanging between 2 fixed points. (The word "catenary" comes from the same word as "chain".)

But if the chain is thinner in the middle, it has a slightly different shape (it is flatter). Since the Gateway Arch is thinner at the top than it is near the base, the architect chose a flattened catenary, whose equation has the form:

Now, in our example there will be a negative in front of our equation (since the catenary is inverted) and we also will need to add A to our equation so the curve passes through (0,0) (otherwise it will pass through (0, -A)).

Using a computer algebra system, we solve the above system of equations and obtain the following equation.

Here is the plot of that curve superimposed on the Gateway Arch (in light green). The parabola we found earlier (in magenta) is there for comparison. We can see our catenary follows the shape of the bridge quite closely, especially at the bottom. 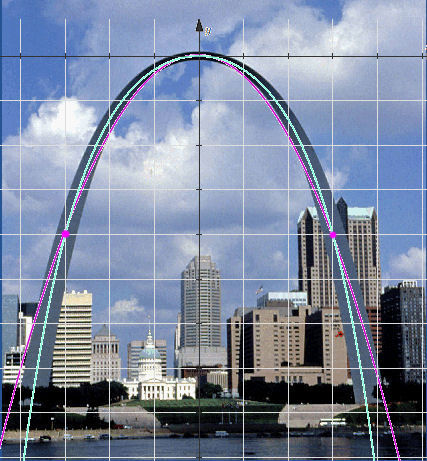 This article has shown the Gateway Arch is not a parabola. Rather, it is in the shape of a flattened (or weighted) catenary, which is the shape we see if we hang a chain that is thin in the middle between two fixed points.

We have also seen how to go about modeling curves to find the equation representing such curves.

See the 48 Comments below.

48 Comments on “Is the Gateway Arch a Parabola?”