You calculator showed an error, right? Hopefully this reminded you of what your math teacher always said — you can’t find the square root of a negative number. This is because whenever you multiply any number by itself, you get a positive number.

Since squaring a number always gives a positive number, we normally conclude that it’s not possible to find the square root of a negative number.

But is this correct?

During the 16th and 17th centuries, mathematicians were interested in solving polynomial equations (because of their importance in science and engineering), something like:

But there was a problem. There should be 3 solutions for the above equation, but they could only find 1 solution.

Why do we expect 3 solutions? Let's look at 3 cases where we know something about the roots.

Tip: A "root" of an equation is a value that makes the equation "true".

In this image, we see the graph of a linear equation and it cuts the x-axis in one place only (marked with a red dot).

Tip: Wherever the graph cuts the x-axis will give you the root of an equation.

[Exceptions: If the linear equation has slope 0, it will be parallel to the x-axis and will not pass through it, so will have no solutions, like the following image.

The other exception is if the line is parallel to the y-axis.]

Tip: Always draw the graph! The Chinese are right - a picture is worth a 1000 words. When you draw graphs you get a much better idea of what is going on.

Here we see a typical quadratic equation with 2 roots (marked with red dots).

We can also have the case where there is only one solution. This might occur if our quadratic is of the form (x − 3)2 = 0.

But sometimes when you use the quadratic formula you will get a negative number under the square root.

At this point we usually give up and say there are "no real solutions". But what does this really mean? We obtained 2 solutions, as expected, but they are "illegal".

The graph of this situation is as follows. The curve does not cut through the x-axis at all so there appear to be no solutions.

(c) We expect a cubic equation to have 3 solutions since the highest power of x is 3. In the following image, we see that the curve cuts the x-axis in 3 places, giving us 3 roots.

But sometimes, there is a repeated root, so we only have 2 places where the curve cuts the x-axis.

The graph of this situation is as follows. There is one point where the curve cuts through the x-axis.

By the early 1600s, the famous mathematician and philosopher Rene Descartes called the square root of a negative number "imaginary". No-one was really sure if they were legitimate numbers, but because such numbers kept cropping up in different fields of mathematics — and they were found to "work" — they were studied more closely.

Around this time, the letter i (possibly for "imaginary") was used to denote the square root of −1. So we write:

A complex number contains a real part and an imaginary part.

Using this, we can solve our cubic equation from before. We cannot see the other 2 solutions but we can apply various methods to find the complex roots and we get:

In the years since the 18th century, complex numbers have been regarded as legitimate numbers in the field of mathematics. They have proved to be important in electronics.

You can see more about these special numbers, with applications in electronics, here: Complex Numbers. 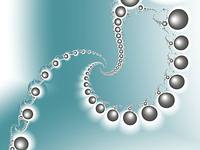 See more on this topic: Fractals.

Coming up on March 14th is Pi Day, so named because the first 3 digits of pi and the date 3/14 coincide. Some people go all out and have a special event at 1:59 PM, to recognize the next 3 digits of pi.

Pi is an interesting number and mathematicians have spent countless hours over the centuries learning more about it.

What is your school doing on Pi Day? If you don't have anything planned yet, there are some good ideas in these resources:

A poll during Feb 2009 asked readers if they were allowed to use formula sheets during their tests and exams. I asked this question because in a previous poll many students said that one of the main reasons that math is difficult because learning math formulas is hard.

Tip: Even if you know you're going to get a formula sheet in your exam, learn your formulas well enough so that you don't need the sheet.

Because if you know the formulas well, you are more likely to choose the correct one. I have seen many students rely 100% on the formula sheet and it is obvious that they have no idea which formula to use for a particular situation.

Of course, you can always check that you have the formula exactly right using the sheet you are given.

The latest poll asks readers what they do on the night before a math exam. Do you study until late, or go to bed early? You can answer on any page in Interactive Mathematics.

4. From the Math Blog

1) Friday math movie - math problem solving with mind maps
This week's movie gives you some good tips on how to solve math problems.

3) Friday Math Movie - Math in Art
This movie shows some beautiful art that comes from the study of dynamical systems in math.

4) Manga Guides to Statistics and Databases
Here's a series of math books based on Japanese manga (comics).

5) Energy reduction with Google's help
How much electricity is your home consuming right now? Not sure? Here’s a neat tool from Google that will allow you to see details of your daily energy consumption.

5. Final Thought - Math is human, after all

“Concern for man and his fate must always form the chief interest of all technical endeavors. Never forget this in the midst of your diagrams and equations.”
Albert Einstein

I realized some time ago that many math classes have no human element to them. That is, they are all algebra with no application and no implications for people.

So my suggestion for you, whether you are a student or a teacher, is to always look for what's behind the math that you are doing.

Math wasn’t invented to torture you — it was developed to solve some human problem. Go find what that problem was — you'll understand the math better and find it more interesting, too. (Most chapters in Interactive Mathematics start with some applications and/or history of the topic.)