If you've already had concrete experiences with such quantities in the "real" world, math can be hard enough - but what if you haven't had such experiences?

Here are some interesting recent news items showing how students are learning math by making things. It gives them concrete experiences and an understanding of how "real" mathematics arises out of trying to solve actual problems.

As a comment, I think it's sad that such news items appear during the summer when students are on math camps. Why aren't such experiences built into the normal curriculum? 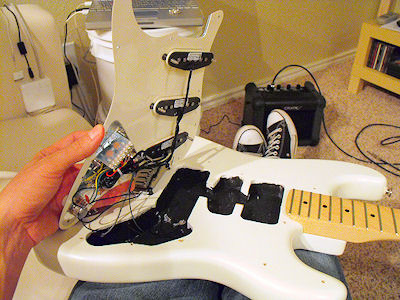 In Bakersfield, California, we read in "Students Make Guitars To Learn Math, Other Subjects" (no longer available) how some Bakersfield College students "are learning about science, technology, engineering and math while making their own electric guitars from scratch" in a summer workshop.

"It's about taking concepts of science, technology, engineering and math and making them come alive to students and not just subjects in a book or classroom."

"There's a lot of math that goes [into] the fret board, and spacing of frets [makes] a huge difference in how it'll sound."

The article includes a video of their experience.

Meanwhile in Kentucky, some lucky students get to learn math through building airplanes.

At the Kentucky Institute for Aerospace Education kids re-build used light planes that have been donated.

Tim Smith, the director of the institute says the goal is:

"To increase test scores and give the kids unique career paths."

"[Students] may want to go into maintenance with aircraft or they could be involved in flying for UPS or one of the airlines, or an air traffic controller, avionics repair. There's many opportunities for a career path. It just gives them options."

The students will go to the famous aviation gathering in Oshkosh, where they'll work on restoring the engine on a 1956 Cessna 172.

Students say they're thrilled with the opportunity to learn this way.

"It's awesome! The ability to come out here and build planes while other kids are just sitting there just learning from a book. Just the difference in the amount of learning that I'm getting is amazing," says Sam McCalla, a student in the program.

Yes, because he is abstracting from concrete experiences - not from a text book alone.

Now we move south to Brandon, Florida where we learn of a robotics summer camp organized by the Florida Advanced Technological Education Center in Summer robotics camp helps kids learn science and math by making it fun and hands on (no longer available)

Robotics is nothing new, but has become more accessible as the price entry point has dropped. Students can learn several important 21st century skills, including how man controls machines via computer.

"I'm really into science so I kind of want to be a biologist or an oceanographer and that requires a lot of good work in math."

The students needed to build the robots and then program them on a computer to go through an obstacle course.

Still in Florida, we learn in Marine Lab, a cool way to learn science how students in a six-day science camp at the Marine Lab learned more about the eco-system of the Atlantic Ocean.

“The coolest thing about the lab is that you’ll spend an hour in lecture but the next hour you’re out seeing everything you’ve just learned about,” said Caleb Kettler, sixth-grade math teacher and founder of the annual Marine Lab trip. “Everything is just so fresh in their minds; they’re naming fish, know the names of the coral and different types of mangroves and sea grass.”

“It was so amazing to learn about that other world. I saw creatures I had never even heard of before. We saw parrot fish, angel fish, jelly fish, all kinds of sea life I didn’t realize we had in the United States.

They crammed a whole year’s worth of science into six days.”

I'm not sure why they start with a lecture. Why not get the students to go out and observe first (based on several set criteria) and take photos? Much better for them to come back, share knowledge and identify what they saw. This would be a more scientific approach.

5. Teachers get into the act, too

Sadly, many teachers learned math from a text book, so they believe that's the way it should be taught.

In the article Riverside County teachers learn to bring math to life (no longer available), we learn how "California teachers in a two-week summer program are learning new ways to teach math concepts and bring the subject to life for students".

Some of the hands-on lessons include calculating the number of water balloons it would take to fill the Perris High School multipurpose room.

Other tasks involved measuring and plotting graphs, such as "Got the Hops," ratios of a student's height to how high that student can jump, "Are You Six 'feet' Tall?" a student's height as measured by the length of his or her foot and "Head Hunters", where they measured the circumference of each other's heads and height and plotted the measurements on a graph.

The course is run by Riverside County Office of Education and is called DELTA, for Developing Educators Learning to Teach Algebraically. This is a curious title. Most teachers do this too much already!

"As a math teacher, we tend to, shall I say, pick our favorite way of instruction and follow it to a T."

High school senior Emmily Lipsitz was helping out. She said she loves math, but...

"...sometimes her teachers are too rigid in their approach. They keep explaining and demonstrating concepts and lessons the same way, even if students don't quite understand."

She said she was videotaping the teachers Thursday.

"I learned ratios in a way I'd never thought or seen before," Lipsitz said.

"The approaches should help students understand why math works, not just step-by-step instructions to solve equations."

And still on the theme of making math "real", in Crash reconstructions aid police investigations (no longer available) we read how police officers recreate fatal crashes with real cars operated by handheld controls.

“What we hope to take away [from the recreation], is hands on training,” SCARS president Ricky Dixon said.

Once again, we see how actual experience provides a superior learning outcome. Of course, it's important to debrief the experience properly, otherwise it can still result in confusion.

Activities include working on "a city planning project using blueprints from Avondale Park and [calculating] distances for Barbie dolls to bungee jump off the stairwell, using rubber bands as the bungee cords."

I hope that collection gives you some ideas on how you can incorporate "real" activities into your math classes. It doesn't have to be a summer-only concept!