The Secret History of the CIA and the Bush Administration 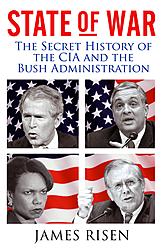 To better understand how the Bush adminstration got itself into such a mess in the Middle East, this book is a must-read. Almost every page contains yet another extraordinary scandal.

To me, one of the biggest scandals is the way Bush and his cronies have seduced the US media - and why it took the media so long to realise what has been going on.

Risen is a reporter for the New York Times. Of course he cannot reveal all his sources, so a lot of times he says things like "a senior aid who was close to the situation said...". There are several places in the book where I feel his argument is weakened because he says things like "There is no evidence that So-and-so ever responded to the cable". Well - he should go ask So-and-so and find out - maybe the reasons for not responding were pertinent.

There are also places where he must speculate on Bush's motives in the absence of evidence. There is enough dirt here that speculation is not really necessary - let the reader do that.

Anyway, some of what's in the book I knew and some of it I didn't know much about. Among the gems:

It goes on and on. Read the book - it is an eye-opener.

Why did he get elected again? Extraordinary. Is this how Christians behave? Give me a break.

Footnote: The scandals of Abu Ghraib and Guantanamo remind me of the disturbing Stanford Prison Experiment. People tend to behave in the way that authority expects (or authorises) them to behave - moral or not. So if Rumsfeld says it's okay to beat 'em up, and Bush meekly agrees, then that's what's going to happen. How long to that next election?