I saw a great documentary yesterday on Putin's meteoric rise to power. (The show was on Australia Network. The "Four Corners" programme on ABC is alone worth the subscription. I love the intelligence of public, non-corporate media...) 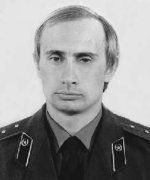 Putin in his KGB days

Such a bunch of scandals that allowed Putin into power! The show dwelt on the cost of restoration of the Kremlin and presidential buildings - and the millions siphoned off for personal gain. Putin's star began to rise when he investigated the investigators and came down hard on them.

Then there was the manipulation of the Russian terrorist bombings to justify beating up on Chechnya. Putin personally appeared with the troops - and they loved him.

Following this was the manipulation of the media to take Putin from 10% popularity to 40% by the time of the prime ministerial election.

After Yeltsin's surprise (not really) resignation, Putin was in power. (Much of this was organised by "The Family", an influential group of Kremlin insiders that included Yeltsin's son-in-law). The rest, as they say, was history.

Now some of the organisers of all this are worried about what they have unleashed. Putin is no idiot and it will be interesting to see if he manipulates the system to extend his time in power beyond the mandated term.