It seems incredible to me that the tobacco companies are still allowed to sell their poisons after what transpired during the 20th century.

The troops of World War I were provided with free cigarettes as part of their rations. It is not surprising that stressed out soldiers were happy to take up something that would give them some emotional relief. Cigarette sales soared after the war, as returning soldiers could not kick the habit. Targeted advertising left a strong impression that smoking was glamorous and sexy. The taboo against women being allowed to smoke was successfully broken by the smoking advertisers.

It all happened again during the Second World War when more soldiers were hooked on smoking (my father among them).

The tobacco industry saw a great opportunity for creating new markets when the Marshall Plan was drawn up. Millions of free cigarettes poured into Europe. From PBS's American Experience (original no longer exists):

Then in the 1950s came the medical studies that showed a strong link between cigarette smoking and cancer, which the tobacco companies strongly denied and continued to claim that the evidence was unclear and more research was necessary. It became clear later that their own scientists were aware of the link but were never allowed to admit it.

In the 1980s, the Japanese published a study which showed the link between increased cancer risk for a woman if her husband smoked. When I lived in Japan, I was disgusted by the amount of smoking and I had a real fear of second hand smoke. We would go into a restaurant and ask for a smoke-free seat. They would not know what we were talking about. You would aim for a relatively unpolluted spot but after a short time, some unhealthy businessman would sit right next to you as you were eating and blow smoke all over you. It was extremely irritating trying to enjoy your sushi when bathed in a soup of nicotine tar.

And do you want to know who is the biggest shareholder of Japan Tobacco, the largest cigarette company in Japan? It's none other than the Japanese government.

After all the negative publicity, tobacco sales began to drop in the Western world. So the peddlers of cancer turned to Asia for their next victims. They are trying all the same tricks they used in the West 50 years ago, giving cigarettes a sexy, young and "must have" image. China, of course, is a huge market. Vietnam, Malaysia and Indonesia are lung cancer centres of the near future.

But what of Singapore? Actually, it is really good here, in that smoking is banned in all air-conditioned spaces, in queues and now in most parts of outdoor restaurants (called hawker centres). There is a huge tax on cigarettes and attempts at smuggling from Malaysia are common.

The cigarette packets and in-store advertising must display gruesome photos depicting lung and throat cancers, along with health warnings. 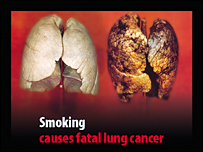 I'm wondering when they will ban smoking outright. Why not? All other harmful drugs are vigorously discouraged (with death penalties for traffickers).

Footnote 1: One of the most disturbing images from the recent haze episode (Indonesia's annual forest fire burning which pollutes surrounding countries) was the photo of a local firefighter surrounded by thick smoke and he was having a cigarette break...

Footnote 2: (the math of cigarettes) When my father was in his 60s he began having attacks. He would stop breathing and fall to the floor, turning a terrible grey colour. They were not heart attacks, but were caused by insufficient oxygen getting to the brain. He had about 4 of these attacks but still couldn't give up smoking. One day, his doctor worked out that 3 packets a day times 20 cigarettes in each packet times 10 cm per cigarette times 40 years of smoking gives the equivalent of smoking a cigarette 87.6 km (or about 55 miles) in length. He quit immediately.