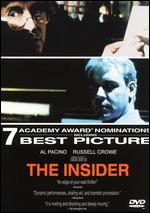 The Insider (1999, Touchstone) tells the story of Dr Jeffrey Wigand, who was fired from his job as a scientist at Brown & Williamson Tobacco Corporation for "poor communication". He was approached by 60 Minutes to become a paid consultant for a story on the tobacco industry.

Jeffrey Wigand joined the upper echelon of the tobacco industry in the late 1980's, hoping to create a safer cigarette for smokers around the world. Ten years later, he is emerging from his experience a hero -- not because he created a safer product, but because, along the way, he just happened to become the highest-ranking executive to go public with what he knew in the history of the tobacco industry.

The movie was refreshing in that it took on the issues, which included:

Wigand's revelations triggered one of the most inglorious moments in the history of 60 Minutes, when CBS initially shelved an interview with him, fearing a lawsuit from his former employer, Brown & Williamson Tobacco.

I remember seeing the actual interview once it was finally aired. It was powerful and a real indictment of the lies that have ben pedalled by the tobacco industry for years. The worst revelation was about the use of ammonia to give smokers an even bigger kick (and to increase the chance of addicition).

I was wondering about the pressure suffered by the makers of this 1999 movie. Anyway, they did manage to make it. I imagine it was not a hit in Kentucky and the other US tobacco states.

My complaint about the movie is that all the lead characters (Al Pacino and Russell Crowe) mumbled their way through their lines. I was glad I had access to subtitles or I would have missed a lot. Why are so many Hollywood movies made like this? Acting 101: "Open your mouths, move your lips. If the audience don't understand the line, it's not worth delivering."

The more I see Crowe (A Beautiful Mind, and an interview that I saw come to mind), the more I think he does not need to act much in these moody, reflective and paranoid movies - it seems to come naturally.

Footnote 1: On Wigand's site, you can see trailers of the movie and also transcripts of the 60 Minutes interview. There's also the transcript of "The Seven Dwarves" giving testimony about their beliefs on tobacco addiction:

Tobacco company CEOs declare, under oath, that nicotine is not addictive

MR. JAMES JOHNSTON (Chairman and CEO of RJ Reynolds Tobacco Company). Mr. Congressman, cigarettes and nicotine clearly do not meet the classic definition of addiction. There is no intoxication.

MR. WYDEN. WeÂ´ll take that as a "no." Again, time is short. I think that each of you believe that nicotine is not addictive. We would just like to have this for the record.

MR. TADDEO (President of U.S. Tobacco).
I donÂ´t believe that nicotine or our products are addictive.

Yeh, right. It's amazing how money makes us blind...

Footnote 2: Which states are tobacco states? Have a look at the 7 states with top percentage rates of adult tobacco use. It tells us a lot. (I don't imagine too much tobacco is grown in Alaska, though...)