Vector fields provide an interesting way to look at the world.

Before I tell you what a vector field is, let's look at a few examples. Each of them involves patterns - the building block of all math.

The daily weather chart (showing wind speeds) is an example of a vector field. The wind direction and strength is given for different points on the Earth's surface. 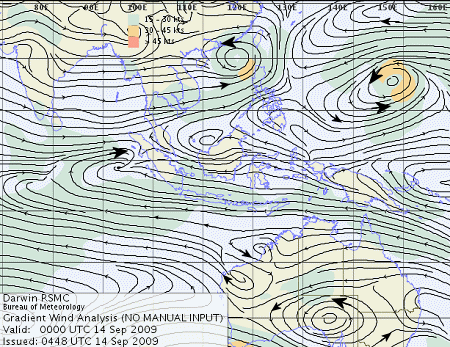 In the above chart of the Australia/South Asia region, gentle winds (across most of the Indian Ocean) are indicated by a small arrow head, and stronger winds by larger arrow heads. Winds rotate around high and low pressure systems, in opposite directions for the Northern and Southern hemispheres.

Below is another wind chart giving us a better idea what a vector field is. This time we are looking at the winds surrounding Cyclone Ike, which devastated Texas in September 2008. The winds in the center were over 200 km/h. (The scale on the chart is in knots, the unit we usually use for wind speed.) The direction of the "F" symbols indicate wind speed, while the color indicates magnitude. 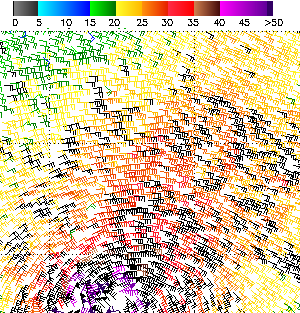 Another example of a vector field is the pattern made by iron filings when under the influence of a magnetic field. 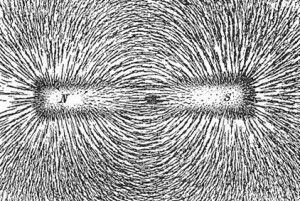 Iron filings lining up around a magnet. Image source

We're ready for a loose definition of a vector field.

A vector field is simply a diagram that shows the magnitude and direction of vectors (forces, velocities, etc) in different parts of space.

Vector fields exhibit certain common shapes, which include a "source" (where the vectors emanate out of one point), a "sink" (where the vectors disappear into a hole, something like a black hole effect), a "saddle point" (which looks like a horse's saddle), and a "rotation" (where objects rotate around some point, something like a planetary system).

Following are some excellent visualizations of vector fields for you. If you visit the links, you can play with the vector fields to explore the concepts involved.

There's some pretty neat art going on, too, but that's just a lucky outcome.

Visit the following example from the Demonstrations site by Wolfram. These interactives are made using Mathematica. There are 2 things you can do:

The link to the interactive: Vector Fields: Streamline through a Point

In this interactive, you can grab the point indicated by the larger dot and explore the direction of the vector field. The developer says:

Drag the locator; the red streamline then passes through that point, illustrating the flow of the vector field. The vector fields show rotations, sinks, sources, and saddle points.

A Neural Network and vector fields

Your brain consists of millions of neural networks. When you start thinking about something, some of your neurons fire and this triggers nearby brain cells to fire. Soon (within milliseconds), a larger network of neurons begins to fire (you are getting excited about what you are thinking about and it begins to consume more of your attention).

This scenario is demonstrated in the following screen shots from the animation: Cellular-Automaton-Like Neural Network in a Toroidal Vector Field

The first torus shows the beginnings of our thought, the second one shows the network after some excitation.

Neurons firing in a neural network

The developer of this interactive says:

Red indicates cellular activity (a neuronal spike) while blue indicates inactivity. Color intensity encodes the value of a binary internal state variable. The weights between each cell and each of its neighbors have been adjusted to reflect Boltzmann-like transition probabilities appropriate for flow in a constant vector field on a torus (the angle of the field is an adjustable parameter in this Demonstration).

This is a superb interactive. There are a huge number of examples here (use the pull-down arrows at the top right of the java applet), with clear animations indicating direction and magnitude (usually velocity or forces involved).

Here is an animation from Australia's Bureau of Meteorology showing the wind velocities involved when a high and a low pressure centre interact.

Source: Animations of wind in 3 dimensions

Here are some more examples of 3-D vector fields, once again from Wolfram's Demonstrations. 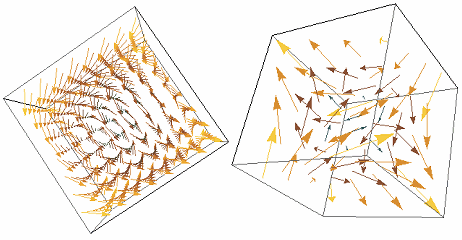 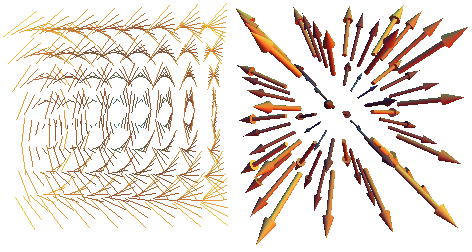 This next one is a vector field related to gaming and learning.

We all learn from experience. We tend to be attracted to strategies (in real life and in games) that were successful in the past. 'Experience-weighted attraction' (EWA) learning is a model of game behaviour where we modify our strategies based on our success with those strategies. For example, in the game of chess, we may find that we are most successful when attacking with our knights, so we continue to use that approach. But our opponent learns what we are doing and develops a good counter-attack. We change our approach.

The mathematics behind all this is that we can estimate probabilities of players changing approach. Since these are multi-dimensional problems, we can draw vector fields representing the probable outcomes.

The following variables are involved when two players use the Bush–Mosteller reinforcement learning algorithm playing a symmetric  game:

Two parallel circular conductors both carry current in the same direction. The circles lie parallel to the x-y plane. 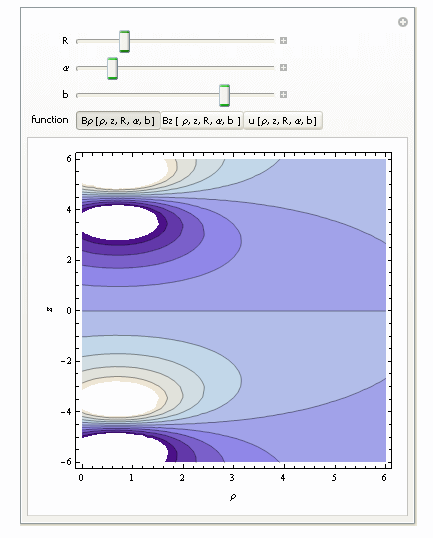 A simple example of a Vector Field

Here's a more formal definition of a vector field. It applies to 3-dimensional space as well.

This means every point on the plane has a vector associated with it (with magnitude and direction).

Let's see what this means with 4 points in the plane.

Here are the 5 vectors we just described. Notice the forces in the middle of the vector field are very small, and they get bigger as you get further from the origin. 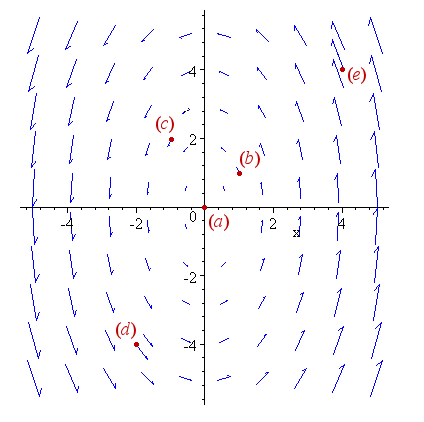 That brings us to the end of our exploration of vector fields. They are not scary, despite the way many textbooks present the topic.

16 Comments on “Vector fields - a simple and painless introduction”