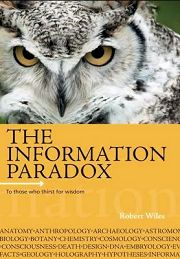 Robert Wiles is a medical doctor and part-time lecturer at Australian National University. He approached me a while back asking permission to use a Fourier Series graph from IntMath for a book he was writing.

He recently sent me a copy of the book, and it certainly triggered me to think about some of my long-held assumptions regarding the beginnings of life.

In The Information Paradox, Wiles outlines his views on (what he sees as) fundamental flaws in Darwin's theory of evolution.

(1) No evidence for macroevolution?

There are countless examples of microevolution (small adaptations within species), such as different breeds of dogs, different types of cattle, different breeds of sheep, and a multitude of plant varieties. At the end of the day, a chihuahua and a Great Dane are both dogs. So there's no argument there. 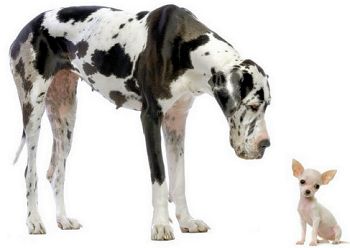 On the other hand, there is no evidence (according to Wiles) of one species becoming another (called "macroevolution"). He points out all the cases where we would expect to find "missing links" but there are none.

However, there are some strong contenders for cross-species animals, like the 150 million year-old Archaeopteryx (which shares characteristics of both dinosaurs and modern birds) and the 375 million year-old Tiktaalik (which had the gills, scales and fins of a fish, but also had lungs and primitive legs of 4 legged-animals.)

This was not the strongest of Wiles' arguments, since the fossil record will always be incomplete and more discoveries will shed further light on how species were transformed. I do agree, however, that we could probably expect to observe cases of current animals or plants that are "mid-species" (neither one nor the other).

(2) The first ever cell must have been complex

Wiles goes into great detail about the characteristics of cells and their requirements for life. His medical background helped lend credibility to this section, and he presents strong arguments.

He conducts a thought experiment on the simplest possible cell, and concludes it was very unlikely to have "emerged" from a lucky combination of chemicals, and certainly couldn't have reproduced itself (a requirement for life to continue) without some external "help". This "help" would have involved some pre-existing complex information (the key narrative of his book). How else would the cell "know" how to form all of its parts in the right places, perform all of its functions at the right time, live for a while, then reproduce itself?

It's true that even the most primitive cell is an extraordinarily complex mix of chemicals, plumbing, energy exchange, DNA, moisture and waste management. The chances of such a living being appearing randomly are indeed very remote.

And of course, the "Goldilocks" nature of Earth's characteristics (not too hot, not too cold, and with enough water, oxygen, carbon dioxide and other gases to sustain life) in the vast cosmos of space is also extremely unlikely.

This portion of the book certainly caused me to re-consider this essential aspect of the evolution story. Arguably. how those very first cells appeared is an item of faith on all sides of the evolution debate.

But then again, unlikely events still do occur...

(3) Our vision is processed by Fourier Transformations

Wiles requested permission to use one of my Fourier Series graphs (the one near the bottom of the Fast Fourier Transform page).

He quotes from the work of Russell and Karen de Valois, who studied cells of the visual system to figure out how we actually see things. Their conclusion was that vision at the cellular level could be achieved in a process similar to Fourier analysis. That is, we see colors as a combination of frequencies of different amplitudes, and our cells conduct a kind of Fourier process to discriminate how much of each frequency (and what amplitude) is present in the light we are looking at.

Our ears do a similar process. The hairs in our cochlear vibrate at different frequencies. It's the unique combination of those frequencies that help us to distinguish which instrument is playing the same note whether it be a violin, flute or cello.

In The Information Paradox, Wiles presents these insights as part of the discussion on "Information and The First Organism". He outlines how complex our sensory systems are, and ponders how unlikely it is that our eyes could evolve to be so powerful just by chance.

(4) Embryo development as "proof" of evolution

Wiles rubbishes the idea that comparisons of animal embryos shows that we have common ancestral links, and casts doubt on many of the images that support this notion.

For example, he's not a fan of this kind of image which shows chickens and humans possibly shared a common fish ancestor, since the embryo shows fish gill slits at some development point.

Indeed, the 19th century idea that embryos go through each stage of their evolutionary development (called "ontogeny recapitulates phylogeny") is generally regarded as not true, but it certainly appears true that we hang on to some of our ancestors' characteristics.

The bulk of The Information Paradox argues for an "Information Model", and proposes some "Laws of Information", such as:

He examines such laws in great detail, giving many well-researched examples and arguments and concludes that some sort of "coding" must have been present from the time of the Big Bang, otherwise the universe would be just a random collection of rocks.

(6) What is the book really about?

You've probably guessed by now what Wiles' main agenda is. He makes it quite clear in the final pages where he stands on religion. I think it would have been stronger if he had left it up to the reader to draw their own conclusions from an otherwise well-researched, interesting and thought-provoking book.

Energy, matter and time have been recognized as fundamental entities for nearly 100 years but now a fourth entity, Information, is being viewed in a similar way. Yet although we live in the Information Age, very few books have been written specifically about it. This is the first paradox. This book explores the information within life, the mind and the Universe, demonstrating not only that information is another fundamental entity but that it is the entity from which all the others are built.

It's certainly worth a read. I enjoyed being challenged about past ideas, and being motivated to find out more.

3 Comments on “The Information Paradox”