Start with 7 marbles, add 3, add another 3, then subtract 8. Many students will write this for their answer:

Now, each of the operations is done correctly, but the whole thing is actually not correct since the first expressions (7 + 3 and 10 + 3) don't equal the last expression (13 − 8) or the final number.

This is called a "running equals" and it is quite wrong.

In the article Students' understanding of equal sign, we learn that 70% of middle grade students in the US had misconceptions about the equals sign (Research by Robert M. and Mary Capraro of Texas A&M University.)

As an example, they cite the following question:

Many students will incorrectly add everything on the left, put that in brackets, then proceed to add the final 2.

The question really requires the following:

Why do students make such mistakes?

One of the first things we learn in math is the equal sign. We count 4 blocks and add 2 blocks and get 6 blocks. Some (well-meaning) person tells us we can write this as follows:

Did you realize that the equals sign is a relatively recent invention, and that mathematicians did just fine without it for thousands of years?

The equals sign, "=" was invented by a man from Wales, Robert Recorde in the mid-16th century. He used equal-length parallel lines because "nothing could be more equal".

Before the invention of the "=" symbol, mathematicians employed useful and expressive words to indicate what was going on. So when adding, they used "gives" or "yields". Other early symbols for equals included "æ" (from the Latin "aequalis") and 2 vertical parallel lines, ||.

Over the years, several different meanings have evolved for the "=" sign, and this can increase student confusion.

Meaning #1 - result of performing an operation

What if we flip the above statement and write it as follows?

Now it means we start with 6 and we have decomposed it into 4 + 2. But we could also decompose 6 in any of the following ways:

This time we have an infinite range of answers. Clearly "=" here is used differently than in the 4 + 2 = 6 example, where we had one possible answer (assuming we are only talking about real numbers, of course), while the second set of examples starts with a single number and suggests a very open-ended set of solutions.

Now, let's look at another case.

In set theory, "equal" is not the same as "equivalent".

For example, the set {1,2,3} is equivalent to the set {a,b,c} since they both have the same number of elements (the same cardinality), but they are not equal since they don't contain exactly the same elements.

We can have equivalent equations. For example, the following 2 equations are equivalent since they have the same solution set:

Both equations give us x = 5. We can't say we have "equal equations", but we do use the term "equivalent".

Two fractions can be equivalent:

They look different but they have the same value.

Notice I used the "3 horizontal lines" symbol (≡) for "equivalent". We can also say "equal" in this example.

This next one causes a lot of debate. Start with 0.9. Then, take the larger number 0.99. We have moved closer to 1, correct?

This employs a very different concept to the first 3 meanings of "=" given above. Is it exactly equal to 1? Don't we need a "limit" statement of some kind?

Here's another one. Being irrational, pi cannot exactly "equal" some number. Or can it?

We can show that pi has the following value:

Here's another place where many students come unstuck - proving trigonometry identities. Say the question is:

Now essentially the steps are correct, but it is difficult to follow the logic. Should we go left-to-right, or top to bottom, or a mix of the two?

What the student has done is to work down the left side and right side in a parallel fashion until he got something that looked the same on both sides.

It's not the best proof, since there is no clear statement of what we start with and what we are doing in each step.

Computer languages and computer algebra systems use different symbols for the different meanings of the equals sign.

In PHP computer language, for example (which IntMath and squareCircleZ uses), "=" is used to assign the value of a variable, while "==" is used to check for equality.

So for example, the following statement means variable "a" will have value 5 from this point on in the program.

If we need to test to see if some condition is true, for example whether variable "b" has value 3, we would write:

In the computer algebra system Mathematica, the "==" sign is used for solving equations, as follows:

Note the "->" symbol for equality in the output.

For comparison, the rival software Mathcad has 4 different equal signs:

Assignment (:=) To assign a value to a variable, you need to use the "colon equal" notation which looks like this:

Display a value (=) To display the value of variable "b" in Mathcad, you just type "b=" and the value will appear:

Symbolic equality (=) To evaluate a symbolic expression you use the "bold equals" symbol:

Global assignment (≡) This is the "identically equal to" symbol from mathematics. This is used when you want to fix a variable throughout a whole math worksheet, not letting it be changed by other variables:

This is a different sense from that used in mathematics, however. But as the identity symbol suggests a "strong equals", perhaps it is appropriate.

Part of the problem?

This is a screen shot from a video that extols the virtues of interactive white boards for math teaching.

The instructor's question is "Evaluate the equation". Can you really "evaluate an equation"?

You can solve an equation for some variable, or you can state that expressions are equal in an equation, but you can't evaluate an equation. 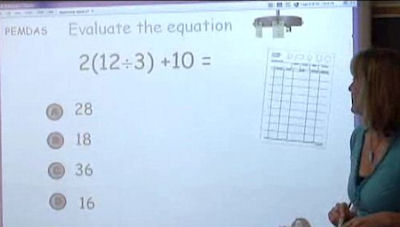 We need to be careful how we express mathematics questions since this is where misconceptions can arise.

So why do students make mistakes with the equal sign? It's most probably because there are several nuances in meaning for the equal sign.

Perhaps we need to consider using a wider range of symbols for the different types of equals. One place to look is the notation used in computer languages or computer algebra systems.

See the 28 Comments below.

28 Comments on “The equal sign - more trouble than it’s worth?”