A reader wrote to say that there was an error on the page Number Properties in Interactive Mathematics. It said:

When I wrote the page, this was indeed the highest known prime, but in 2008, the GIMPS project (the distributed computing Great Internet Mersenne Prime Search) found an even larger one:

This prime has around 13 million digits. Here are some of them (with millions of digits omitted in the middle): 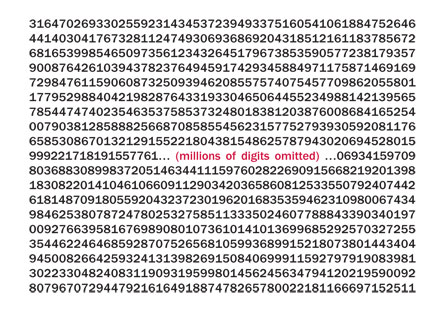 So finding primes is a matter of trying higher values of x in the expression 2x − 1 and testing if they can be factored.

What is a prime?

Every time you use a password to access a bank account or web site, there is a good chance that a large prime number was used in the encryption process.

Want to make some money with primes?

This is where distributed computing power becomes important — according to ZDNet, a single computer would need 500 years to test a billion-digit prime number.