Every 10 years the US government conducts a census. Like all statistics-gathering, especially when people are involved, it is not as simple as it may seem.

The word "census" is from a Latin word which is related to "censor" (to judge or assess, to block) and "censure" (to criticize harshly).

The main idea of a census is to count people and to know more about their characteristics, so there is more effective infrastructure planning (schools, roads, trains, airports, water, etc).

The current decennial census will cost taxpayers $11 billion (source). It used 1st April 2010 as the reference date, when everyone was supposed to complete the form.

Only 72% of households participated and currently workers are visiting the 48 million households who did not submit their forms.

This year the census cannot be completed online, which is rather surprising.

Most of the census questions are seemingly straightforward, about names, dates of birth, relationship to head of family, sex, marital status, and number of children. (You can see a sample census form on the official Census 2010 site.)

It's interesting to see how the census has evolved over time.

"Christian name in full, and initial of middle name."

I'm sure many of the Asian, Jewish and Muslim immigrants did not have a "Christian" name and may have found this question quite offensive.

And in a sign of the times, the next question asks:

"Whether a soldier, sailor, or marine during the civil war (U.S or Confederate), or widow of such persons".

Are you a slave?

Going even further back, the 1830 census asked people to classify themselves as:

Here's part of the 1830 result, showing the high proportion of slaves in the State of Virginia:

The question about "marital status" is not that simple. This is one question which gay couples could find difficulty in answering, since it is illegal in 47 of the 50 US states to marry someone of the same sex.

Another issue is that of common law (or de-facto) marriages, which are still illegal (or not recognized) in 39 US states. I wonder how many people answer "de-facto" anyway?

It's interesting to follow the debate about the race (and/or ethnicity) questions in the US census over the years. This question gets changed all the time since many people find difficulty knowing what to put.

For example, back in 1890 the form asked the head of the house to nominate:

If you were from India (as opposed to being "American Indian", what would you say?

In the 2000 Census, for the first time ever people were able to indicate more than one racial category.

In the 2010 Census, here are the 2 race/origin/ethnicity questions: 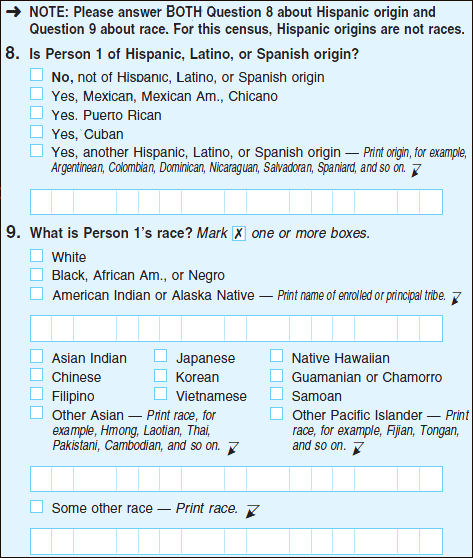 They assume people are in one of 5 racial groups:

It surprises me they still refer to "American Indians" (rather than "Native American"), but apparently this is their own preferred terminology.

There are some interesting lesson resources on the census at Learner.org: The Census: Who we think we are. It includes a video of a workshop where people have to try to fill in old census forms, and many of the participants find it impossible since they don't "fit" anywhere.

There are also lesson resources from the Census Bureau: Census in Schools

Coincidentally, Singapore is also in the midst of conducting its decennial census. (See Census 2010). They don't ask everyone to complete the form in Singapore since they already have a pretty good handle on who is here. Only just 200,000 randomly selected households are asked to provide more detailed information.

Response can be by Internet, telephone (computer-assited) or face-to-face interview.

The Singapore government has very clear views about race. Such information is prominently displayed on identity cards and most forms you fill in ask for it.

I was uncomfortable with such disclosure when I first came to Singapore, but the overall racial integration policy (including ensuring mixed-race housing estates with no ghettos) works well.