I've been developing a new graphing system for IntMath (see the following article on svgPHPGrapher).

It's been an interesting challenge and I've learned a lot doing it. One of the issues I constantly grappled with was that of sampling. To produce a smooth curve that goes to the edge of the graph boundaries (especially when it involves discontinuities), you need to sample a sufficient number of points. But if you take too many, it takes too long for the computer to create the graph, and ends up inflating the size of the graph file.

I thought while doing this that there are a lot of parallels with the way students learn how to sketch graphs. The age-old technique of drawing up a table, substituting in some values, putting dots on the graph paper and then joining them with a curve is not always a good idea, since it can trap those who aren't careful, or who don't have a sense of what the graph should look like in the first place.

This article is about sampling, and includes a bunch of examples of the new graphs I've been developing.

While I obviously believe students should use computers to draw graphs, it's important even then to have a sense of what it should look like first.

A few months back I wrote an article about Hyperbolic and Exponential Discounting. A reader kindly sent me a journal article that describes an application of hyperbolic decay, involving capacitors.

Almost all electronic devices contain capacitors, which have the ability to hold an electrical charge for a short time.

The puzzle in the last IntMath Newsletter asked about cards on a table.

As usual, it was interesting to observe the very different approaches each of you took.

In the set of digits below, you need to circle 6 of them that sum together to give 21.

There's several things in this video that made me uncomfortable (he sees little ethical dilemma in the hedge fund industry siphoning off the best and brightest, or in living much of his life with the main aim of making mountains of money), but he redeems himself at the end with his philanthropic work. 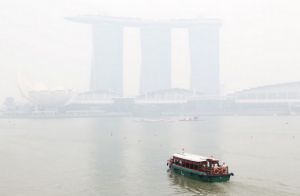 It's that time of the year in SE Asia when millions of people (including me) suffer due to the smoke and haze created by burning forests for paper and palm oil. Spare a thought for the Indonesian villagers nearby the fires, who at times are faced with a PSI (Pollutant Standards Index) of 2000+, when anything over 100 is considered unhealthy. Such pollutant indices include factors such as the concentration of 2.5 μ (micron) fine particles - the ones that can easily pass through your cell walls.

Come on, Indonesian farmers - show some responsibility for the environment, for your own people, and for the vast number of people who are really suffering due to your "cash before life" approach.

See the 23 Comments below.