Miyagawa is a mover and shaker behind MIT’s Open Courseware project, which has provided public access to all of MIT’s online materials. In fact, according to Miyagawa, they were providing materials on the Internet before the Web was even created (in the early 1990s).

After giving an overview of the OCW, Miyagawa gave a few examples of the work he is doing.

One project that I found especially interesting was Visualizing Cultures. Clearly, Miyagawa is a visual learner and he is enthusiastic about presenting history via the images of the times, rather than via text only.

One of the exhibits is about the arrival in Japan by Commodore Perry in his Black Ships. This momentous event in 1853 forced Japan to open up to the rest of the world after 250 years of isolation. It is very interesting to see how observers on both sides of the event - Japanese woodblock artists and American painters - depicted what happened. 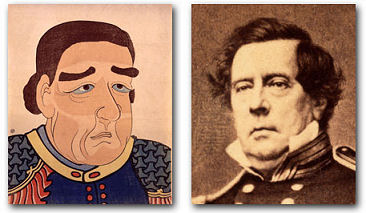 Perry as depicted by the Japanese (left) and the Americans (right). [Source].

The Americans were there (in part) to "bring Jesus to the heathens", while the Japanese saw the event as "the arrival of the foreign devils".

How the Japanese saw the Americans. [Source.]

There were all sorts of cultural misunderstandings.

...the manner in which the Americans pointed to mixed bathing as evidence of Japanese lewdness and wantonness was strikingly similar to John Manjiro’s response, only a few years earlier, to the shocking spectacle of American men and women kissing in public.

Visualizing Cultures is definitely worth a look. There is some very interesting material in there.

I liked what Miyagawa had to say about the neglect of humanity in the race to implement technology.

Miyagawa is also interested in natural language search and machine translation. Unfortunately, I cannot find the example that he showed us (see also footnote below). It was similar to Ask.com. Maybe his was not ready for prime time yet.

He showed an interesting video of a Mandarin conversation software. The student would talk to the computer and if the computer could understand it, the computer would reply. If the student could not be understood, they would have to try again. Such a system would have significant cost benefits, but I wonder how reliable and flexible it is.

It was an interesting talk and I’m looking forward to further investigation into what he showed.

Footnote: I don’t want to rain on his parade, but there are several usability issues with Visualizing Cultures. It was not very search-friendly, and there are links which look very much like ordinary text and I nearly missed them. The use of images containing text and image maps did not make for the best navigation scheme (so 1990s). With the obvious value of this project and the huge amount of work that has gone into it, some good Web design would have nailed it.

3 Comments on “Humanism, technology and learning”