I believe that solving math problems is a very important issue. Mathematics is more than just "doing algebra". If we know how to solve a real-world problems, then we'll have a powerful and important ability, and best of all we'll see why we are doing all this math.

Let's say you have a math problem that is in sentence form. Most people struggle with word problems and one reason is that math word problem solving uses many parts of the brain.

Here are some tips on how to attack math problem solving — and I have included an indication of what goes on in the brain during each step. Here is a diagram of the brain so you can follow along. The front of the brain is on the right of the diagram. 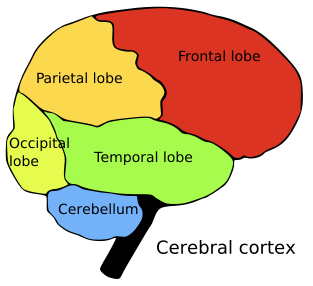 a. Read over the whole problem: Understand the whole question first and take special note of the what?, when?, which?, how many? parts of the question, usually at the end.

b. Write down or draw what the question tells you: By listing the information in the question, it helps you to sift through what you already know and it reminds you of the math that might be involved. Once again your left brain is involved in the writing part, in particular Broca's Area and Wernecke's Area, which are above your left ear.

If there is any geometry involved (or graphs, or moving objects, or any other visual element) in the question, draw the situation. For drawing, you use the areas towards the rear top of your brain (the parietal lobes), the area at the top of your head (the sensorimotor region) and the back of your brain (vision).

c. What do they want? Is the quesion asking for a speed, or a time, or a length, or a position, or a cost? Many students answer a word problem by giving an answer that is not what the question actually asked. In the real world, will your boss be impressed if you give a time answer when they actually asked for a cost?

At this point, it is good to estimate the answer and to write down that estimate for checking later. Estimation involves non-language areas of the brain (while exact arithmetic involves language areas).

So far in our math problem solving, we have a good idea what the question has told us and we know what we need to find. We also have an approximation for our answer.

d. Identify the math required: Now you need to make a decision about the math. Will it involve algebra? Or maybe trigonometry? Or logarithms? Maybe it will involve differentiation or perhaps integration? This is where you see the need to actually learn the formulas in each section of math that you study, and not rely 100% on formula sheets. The best way to recognize the math that you need to use, is to know that math in the first place.

This step uses the higher-order thinking areas at the front of the brain (the frontal lobes) and the memory areas of the brain (which tend to be all over).

e. Do the math: Now we need to churn through the algebra (or whatever) to get our answer. Assign variables to the known and unknown quantities in the question. In the brain, this step involves the frontal lobes and the area behind and above the ears.

Your answer must include units (if there are units in the question).

f. Check, check and check: Firstly, check if your answer is close to your estimate. If not, it's back to the drawing board.

Finally, check all the algebra and arithmetic steps.

Phew! We are done.

Now don't be scared about all the brain activity involved in math problem solving. It's like most human abilities — the more you do it, the easier it becomes and the brain can begin to relax.

George Polya contributed greatly to our understanding of how to solve math word problems. You can see a summary of his approach from his 1957 book "How to Solve It" at G. Polya: How to Solve It.