I’m not the only one dying for a coffee

Next time you head for the local coffee shop, consider:

Here is a sobering list of chemicals used in coffee production, from Coffee and Conservation:

Chlorpyrifos. A broad spectrum organophosphate used against coffee cherry borer and coffee leaf miner. In the U.S., the Environmental Protection Agency banned most household uses in 2000. It is a contact poison. It has caused human deaths, and has been linked to birth defects. It is extremely toxic to birds, freshwater and marine organisms, bees, and other wildlife. It can bioaccumulate and affect bird reproduction. Class II.

An added problem is that the labeling on such pesticides is rarely translated into local languages, and many agricultural workers are illiterate anyway. This results in experimental amounts of chemicals being used and ignorance of withholding periods (the time between application of the pesticide and 'safe' consumption by humans).

What can we do?

Parting shot: I found some forgotten instant coffee in a drawer at work. It's probably a year old. Appropriate for this article. 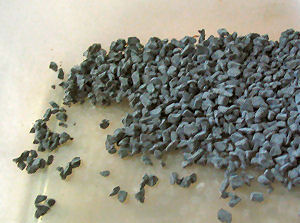