The Original Design and Ultimate Destiny of the World Wide Web 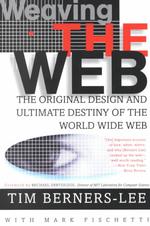 Tim Berners-Lee wrote Weaving the Web during the height of the hype, in 2000. The dotcom boom was about to crash, but Berners-Lee would not have been too affected by that, since his aims for the WWW were not commercial, but selfless and democratic.

It was very interesting to read his recollections on the birth and development of the WWW. His parents were both mathematicians and they had been involved in programming the first stored-program computer at Manchester University in the early 1950s. His father was looking for ways to make this computer more intuitive - to make connections like the human brain can.

This conundrum lit a spark in the young Tim and he thought about it on and off until he graduated in physics and then built his own computer in the 1970s.

But it was at CERN (the particle physics laboratory in Geneva) where he wrote the first Web-like program which he called Enquire. With it, he could remember connections between the other scientists at CERN - what they did, what they wrote, their telephone numbers, and so on. It was then that he started to wonder...

Suppose all the information stored on computers everywhere were linked.

Enquire allowed Berners-Lee to add new information about people as long as it was linked to something else. In a way, Enquire was working like Wikis do today. You add a new page by linking it to something that already exists. The breakthrough was not using the computer to make the connections using rigid matrices or whatever, rather it was the human making the connections and getting the computer to help remember them.

The next thought was to incorporate hypertext into Enquire. Hypertext had been around since the late 1960s, but it was Apple computer's Hypercard and the Macintosh that pushed things along in this direction.

Of course, the Internet had been around since the 1970s and many computers were already networked. But they did not talk nicely to each other.

What Berners-Lee needed to mould all of this knowledge management potential into one coherent entity was a new protocol that all computers could understand. He developed HTTP (hyper text transfer protocol) and then set about developing a simple code that could display information in a browser/editor. That code was HTML (hyper text markup language).

Notice it was a browser/editor that he first developed (on his NeXT computer). His concept was to allow users to edit anything they found by using this new system. Once again, the Wiki is close to his original idea - a place where you could read stuff and add stuff or change stuff, all in a "minimal constraint" setting.

So the WWW was made and the rest is history. Berners-Lee has fought hard for an open, knowledge-sharing, editable, democratic, anti-monopolistic and inter-operable Web. It will surely go down in history as one of the great inventions.

Berners-Lee is now head honcho of the W3C consortium, driving the Web ever onward.

W3C: Leading the Web to Its Full Potential...