Magnitude and Direction of a Vector

A vector is a quantity that has both magnitude and direction. (Magnitude just means 'size'.)

Other examples of vectors include:

Each of the examples above involves magnitude and direction.

Note: A vector is not the same as a scalar. Scalars have magnitude only. For example, a speed of 35 km/h is a scalar quantity, since no direction is given. Other examples of scalar quantities are:

Each of these quantities has magnitude only, and do not involve direction.

We will use a bold capital letter to name vectors. For example, a force vector could be written as F.

The displacement vector A has direction 'up' and a magnitude of 4 cm.

Vector B has the same direction as A, and has half the magnitude (2 cm).

Vector C has the same magnitude as A (4 units), but it has different direction.

Note: We cannot write A = C because even though A and C have the same magnitude (4 cm), they have different direction. They are not equivalent.

So far we have seen examples of "free" vectors. We draw them without any fixed position.

Another way of representing vectors is to use directed line segments. This means the vector is named using an initial point and a terminal point. Such a vector is called a "localized vector".

A vector OP has initial point O and terminal point P. When using directed line segments, we still use an arrow for the drawing, with P at the arrow end. The length of the line OP is an indication of the magnitude of the vector.

We could have another vector RS as follows. It has initial point R and terminal point S.

Because the 2 vectors have the same magnitude and the same direction (they are both horizontal and pointing to the right), then we say they are equal. We would write:

Note that we can move vectors around in space and as long as they have the same vector magnitude and the same direction, then they are considered equal vectors.

Magnitude of a Vector

We indicate the magnitude of a vector using vertical lines on either side of the vector name.

The magnitude of vector PQ is written |PQ|.

We also used vertical lines like this earlier in the Numbers chapter (where it was called 'absolute value', a similar concept to magnitude).

So for example, vector A above has magnitude 4 units. We would write the magnitude of vector A as:

A scalar quantity is described by a numerical quantity and possibly a unit, but not direction.

Examples of scalars include: area, volume, speed, mass, temperature, work, and power. A scalar can be positive or negative (and even complex).

We can increase or decrease the magnitude of a vector by multiplying the vector by a scalar.

In the examples we saw earlier, vector B (2 units) is half the size of vector A (which is 4 units) . We can write:

This is an example of a scalar multiple. We have multiplied the vector A by the scalar 0.5.

We have 3 weights tied to a beam.

We can represent these weights using a vector diagram (where the length of the vector represents the magnitude) as follows:

They are vectors because they all have a direction (down) and a magnitude.

Each of the following scalar multiples is true for this situation:

Each of these statements is a scalar multiplication.

Vectors in Opposite Directions

We have 2 teams playing a tug-of-war match. At the beginning of the game, they are very evenly matched and are pulling with equal force in opposite directions. We could name the vectors OA and OB. 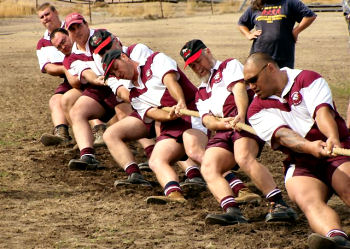 We can represent the tug of war using a vector diagram:

A zero vector has magnitude of 0. It can have any direction.

In the tug-of-war example above, the teams are evenly matched at a certain instant and neither side is able to move. In this case, we would have:

The 2 force vectors OA and OB, operating in opposite directions, cancel each other out.

A unit vector has length 1 unit and can take any direction.

A one-dimensional unit vector is usually written i.

In the following diagram, we see the unit vector (in red, labeled i) and two other vectors that have been obtained from i using scalar multiplication (2i and 7i).