I am swimming downstream in a river. 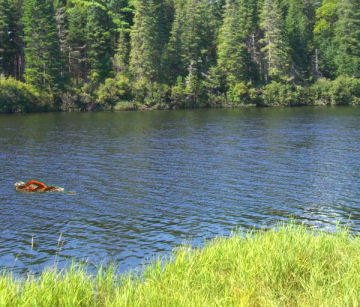 The speed of the river current is 0.25 m/s, as indicated by the length and direction of the blue arrow in the vector diagram.

Our friends are on the riverbank watching me swim. They observe that I am moving quite quickly. My velocity is:

The river is helping me to move quickly relative to the people watching. This is an example of vector addition.

We can show this on our diagram as follows:

The equivalent vector (1.25 m/s downstream) is shown in pink:

The diagram illustrates the boost that I am getting from the river current and demonstrates my total speed, relative to the riverbank, of:

The Return Journey (Subtraction of Vectors)

To get back to my friends, I need to swim against the current so my speed relative to the people who are watching me will be less. My velocity relative to the river bank is now:

The 2 vectors are now acting in opposite directions.

An equivalent way of drawing our 2 vectors is to put the tail of the current vector next to the tip of the swimming vector as follows:

My velocity relative to the people watching (0.75 m/s, upstream) is shown in pink: