We saw earlier how to represent 2-dimensional vectors on the x-y plane.

Now we extend the idea to represent 3-dimensional vectors using the x-y-z axes. (See The 3-dimensional Co-ordinate System for background on this). 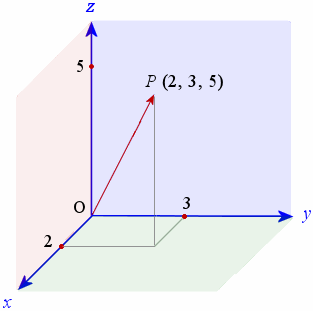 Magnitude of a 3-Dimensional Vector

We simply add the i components together, then the j components and finally, the k components.

Two anchors are holding a ship in place and their forces acting on the ship are represented by vectors A and B as follows:

If we were to replace the 2 anchors with 1 single anchor, what vector represents that single vector?

The problem just requires us to add the vectors to get the single resultant vector.

Using our formula from before for dot product:

Example 3 - Dot Product if Vectors are Multiples of Unit Vectors

Find the dot product of the vectors A and B (these come from our anchor example above):

Suppose we have a vector OA with initial point at the origin and terminal point at A.

Suppose also that we have a unit vector in the same direction as OA. (Go here for a reminder on unit vectors).

Let our unit vector be:

On the graph, u is the unit vector (in black) pointing in the same direction as vector OA, and i, j, and k (the unit vectors in the x-, y- and z-directions respectively) are marked in green.

We now zoom in on the vector u, and change orientation slightly, as follows:

Now, if in the diagram above,

then we can use the scalar product and write:

So we can write our unit vector u as:

These 3 cosines are called the direction cosines.

And now for the denominator:

Therefore the angle between the vectors P and Q is

we find the dot product first:

And now for the denominator:

Therefore the angle between the vectors P and Q is

What is the angle between the 2 strings?

For convenience, we will assume that we have a unit cube (each side has length 1 unit) and we place it such that one corner of the cube is at the origin.

The unit vectors i, j, and k act in the x-, y-, and z-directions respectively. So in our diagram, since we have a unit cube,

The scalar product for the vectors BS and CP is:

where θ is the angle between BS and CP.

So the angle θ is given by


Disclaimer: IntMath.com does not guarantee the accuracy of results. Problem Solver provided by Mathway.