Which is the correct graph of arccot x?

A reader challenged me on the graph I had for y = arccot x, on the page Inverse Trigonometric Functions.

He wrote (in a rather unfriendly tone):

You incorrectly state the range of the arccotangent function as -pi/2 to pi/2.  It is not.  The correct range of arccotangent is 0 to pi.

After some deliberation, I have now included both interpretations on my page, because both are found in various sources.

Obtaining the graph of y = arccot(x)

But depending on your starting region, you'll get a different graph for y = arccot x.

The graph of y = cot x is as follows: 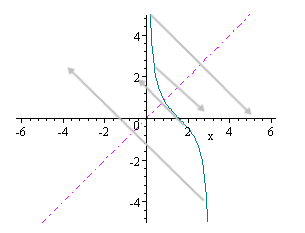 Since reflection in the line y = x gives us the inverse of a function, we have obtained the graph of y = arccot x, as follows:

From the graph we can see the domain (the possible x-values) of y = arccot x is:

All values of x

And the range (resulting y-values) of arccot x is:

If we evaluate our function for some negative value of x, say x = −2, then we get a positive answer, as expected from the graph:

Some math textbooks (and some respected math software, e.g. Mathematica) regard the following as the region of y = cot x that should be used (that is, −π/2 to π/2):

This would give the following discontinuous graph when reflected in the line y = x:

So the domain of arccot x would be (as for Interpretation 1):

All values of x

Using this interpretation, the range of arccot x would be:

If this is the correct graph, we expect a negative answer when we evaluate the function at x = −2. It is actually:

According to a response to a reader's question on this same issue, Dr. Math goes for the first interpretation:

In order to invert a trig function, we first restrict it to a domain on which it takes all its possible values, once each; then we invert the restricted function, whose range is then that restricted domain.

Look at a graph of the cotangent function, and you will see that although between -pi/2 and pi/2 it takes all its possible values, and takes each value only once, there is one problem with this choice: it is not continuous (or even defined) on this entire domain, but is undefined at 0.

The domain would then have to be

To avoid this, we instead choose the domain

which is cleaner to work with, making a continuous function defined over the entire domain.

When I graphed the function acot(x) in Mathcad, this is the result (they are using the first interpretation): 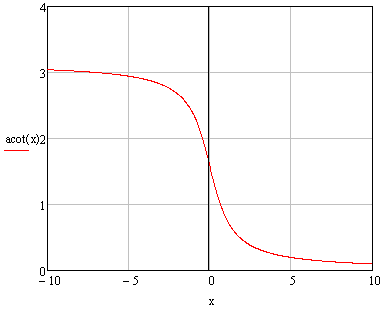 However, according to Mathematica (using Wolfram|Alpha) , this is the graph of y = arccot(x): 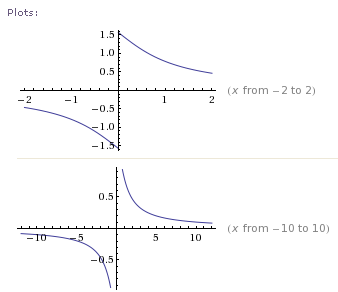 So Mathematica is using the second interpretation of the function. (They use the somewhat poor notation y = cot−1x.)

Matlab also gives us a discontinuous graph based on the second interpretation.

My version of Scientific Notebook has both Maple and MuPAD engines. The results using both of these are curious.

Using the Maple engine, we get an answer using the first interpretation.

But when we switch to use MuPAD in Scientific Notebook, we get this result, which uses the second interpretation! 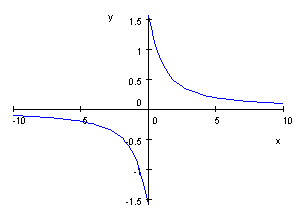 So even the top math software makers can't agree.

Here's another case where our math definitions are not as tight as we are often led to believe.

Also, the notation is inconsistent. Different text books and different software use the following to mean the same thing:

We should never use the last one! (See my rant on this here: Arcsin or sin?)

So which version of arccos(x) is the right one? Is my reader correct? (I don't know his name or email so I can't reply to him. Strange.)

I know which interpretation I think is "best". What are your thoughts?

See the 39 Comments below.

39 Comments on “Which is the correct graph of arccot x?”