The math behind blockbuster movies

There was an interesting article about Ron Fedkiw (actually, it was a promotion for a talk he gave in San Francisco last night).

This is a fascinating use of 'real mathematics' (and physics) in the film industry. 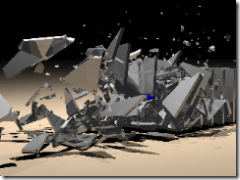 Back to the article. Do our students realise how much mathematics is involved in computer graphics? Do we devote any time to this interesting applied field?

Science at the Oscars

This year, two of the three movies nominated for a special effects Oscar--Poseidon and Pirates of the Caribbean: Dead Man's Chest, both made by Industrial Light & Magic (ILM)-- required heavy numerical simulation, says Fedkiw, who has consulted for ILM for six years. Most recently, the PhysBAM (for Physics Based Modeling) core math engine he developed helped to create realistic water in Poseidon and Davy Jones' tentacles in Dead Man's Chest.

The article goes on to say Fedkiw...

Fedkiw has been recognised for his work on:

Mathematics is heavily involved in simulations:

"The simulation  of gases, liquids and combustion for scientific reasons [mathematical modelling] quickly translates into the ability to make animations of smoke, water and fire," Fedkiw says. "Similar statements hold for soft biological tissues, muscles, fractures and other solid material problems. Once the scientific numerical simulations are worked out, interesting animations can be made shortly thereafter."

Most of Fedkiw's students double-major in math and computer science.

He and his students have worked closely with ILM, Pixar, Intel, Honda and Sony Imageworks. "This collaboration with industry is a two-way street and has produced a number of academic papers--as well as some screen credits," he says. "Both the companies and group at Stanford think of this as a highly synergistic relationship."

It's an interesting topic and one that I would love to pursue further.