Transformation geometry involves moving geometric shapes from one place to another, and studying the characteristics of such moves.

Transformations come in 2 main types - those where the resulting image has the same size and shape as the original (translation, reflection and rotation), and those where there is a change in size (dilation).

Let's look at these more closely.

In translation we move each point on the object a fixed distance. 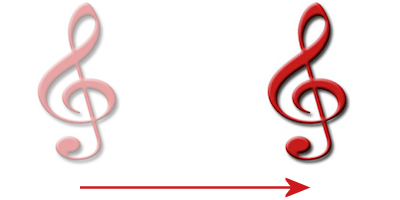 Reflection through a line gives us the mirror image of the original. 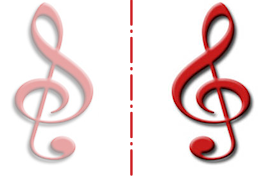 In rotation, we rotate the object around a point. In the example below, I have rotated the treble clef 40° in a clockwise direction about the point P. 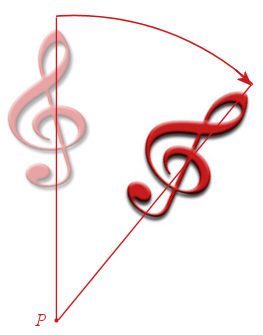 You can combine any of the above transformations.

It is even possible to map the original image onto itself (for example, rotating the object by 360° will bring it back to its starting position).

Finally, dilation involves increasing or decreasing the size of the original object. In the example below, a scale factor of 2 has been applied to the original small treble clef to achieve the larger one. In this case, the shape of the image is the same, but the size changes.

Islamic art makes extensive use of transformational geometry. Repeated tiles are examples of translations and we can see each tile would map on to itself if rotated 90°.

Many of the techniques used in writing music can also be described using the concepts of transformation geometry. Let's look at a simple example.

Many of you would have learned Three Blind Mice when you were a child. Here are the opening 2 bars.

What happens next is very common in music - those 3 notes are repeated. This is like translation in geometry:

To get the next phrase, the composer just translated the pattern up by 2 notes (from E to G). In music, this is called a sequence. He then repeats that bar (another translation to the right):

Three Blind Mice is a round, which means one group (in blue, below) starts singing and after 4 bars, they sing something else ("see how they run"), while a second group (in dark red), sings the opening "Three blind mice".

So a round is an example of a piece of music constructed around translation.

For around 500 years up to the time of Mozart, canons and fugues could be heard in churches and concert halls throughout Europe. Canons and fugues are similar to rounds in that one voice (or instrument) starts by itself and is joined by another voice singing that same melody, perhaps in a higher or lower voice.

This is a fascinating canon by Bach. It is played forward, then backward, then flipped upside-down and played from both ends!
In this video, the music is cleverly placed on a Mobius Strip (a surface with only one side).
This is a great example of transformation geometry in music!

My own Fugue in A Minor

I recently wrote a fugue. The opening melody starts in A minor and modulates to D minor (a translation, of sorts) where we hear the next entry of the main theme.

A fugue is more "free" than a round in that it changes key and there is development of the theme, usually in several different keys.

My fugue is in the style of Bach for the most part, but has a Jacques Loussier jazz feel in the middle.

So here is my fugue. I hope you enjoy it (it's just over 2 minutes. Unfortunately, it's quite soft so pump up the volume.) After it loads, press the "play" button at the top left of the music:

[Fugue in A Minor by Murray Bourne. Embedded from NoteFlight.]

Here is a (color-coded) Bach fugue (Note the geometry in this example!):

And here is Jacques Loussier, the French jazz pianist, playing Air on a G String by Bach in jazz style:

13 Comments on “Music and transformation geometry”