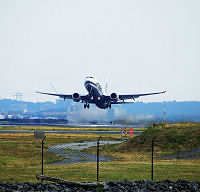 You are the pilot of a jet roaring down the runway approaching takeoff speed. Suddenly an emergency buzzer goes off, indicating a critical loss of oil pressure in one of the engines.

Do you keep accelerating, or do you try to stop the aircraft and stay on the ground?

Before a pilot begins the takeoff run, (s)he needs to know some important decision speeds. These include:

Some of these are fixed for the aircraft type, while others depend on many variables, altitude, temperature, airplane configuration, weight, braking energy, and engine type. [See more on V Speeds.]

The following article is a "real-world math tutorial" from Kidwaresoftware.com:

Computing Airplane Takeoff Speeds (See the link towards the bottom - it's a zipped MS Word file. Update: The doc file is no longer available from that site.)