1. 20th May is World Metrology Day

On 20 May 1875 the International Bureau of Weights and Measures was established in France. The aim was to standardize weights and measures to make life easier for shoppers, shop keepers, scientists, governments, and pretty much everybody.

The Bureau worked on the establishment of the International System of Units (SI system) also known as the metric system comprising 7 base units:

Notice something missing from that list? The litre (used for measuring liquids) is not actually an official SI unit, but all the usual metric prefixes are used with the litre. (The official unit for volume is the m3. One litre = 0.001 m3).

Oh, and when you write the unit for litres, please use upper case "L". Otherwise, depending on the font, it is almost impossible to understand. For example 2 l (is it the number 21? Is it "2 litres"?) Much better and clearer if it is written "2 L". 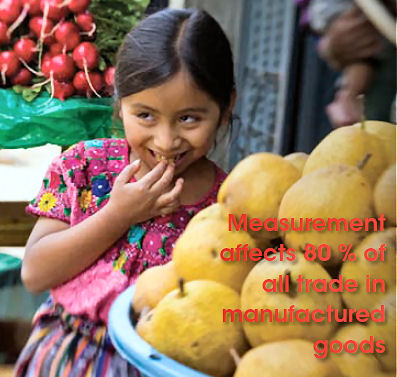 Most countries have officially adopted the SI system. However, lots of people like to hang on to whatever system they grew up with. It's interesting how some units make a come back, like the inch as used to measure the diameter of LCD screens is common even in countries that are otherwise metric.

There are only 3 countries in the world that have not officially recognized the metric system: Liberia (Africa), Myanmar (Burma, in Asia) and the United States.

Rifat (a reader of the Intmath Newsletter) wrote recently:

I wonder where the names "sine" and "cosine" come from? Thank you.

The background to the word "sine" in trigonometry is another interesting example of the way our mathematical systems originated in India and were spread to Europe by the Muslims around 1,000 years ago.

The drawing shows an archer holding a bow. In the Indian language Sanskrit, a bowstring was called a "jiya".

In Arabic, the bowstring is called "jiba", and written "jb" (since vowels are not written).

The European Latin translators thought "jb" was a different word meaning curve, fold, or hollow, which in Latin was translated as "sinus". From there, it became "sine" in English.

The connection between the bowstring and the sine ratio is quite obvious when we look at the following diagram. If the radius of the circle is 1 unit, then the sine of the angle AOB is the half-chord (or half bowstring) DB.

There is in interesting parallel with this story. Our numbers traveled the same route, from India to Europe via the Arabic-speaking Muslims and it was Fibonacci who decided the Hindu-Arabic numbers (1,2,3,4) were a much better idea than the old Roman numerals (I, II, III, IV).

The COSINE of angle AOB is the sine of the complementary angle (angle DBO in the figure above) and it has value OD.

And while we're at it, let's look at where TANGENT comes from. The Latin TANGENS means "to touch." In other words, it means "touching." The length of OB is the TANGENT of angle AOB.

Of course, tangent also means the line that touches a curve at a single point.

The IntMath Poll during April/May asked readers about their calculator use.

It is well known that a good sense of number helps when trying to do algebra. Still, 22% of users say they use their calculator for everything and are probably missing out on developing their natural "feel" for numbers.

57%   I use my calculator but not for everything

The total number of responses was 1800.

The current poll asks what makes a math teacher helpful? You can answer on any page in Interactive Mathematics.

AllMyFaves gives Interactive Mathematics a place: I received the following from AllMyFaves this week.

I am pleased to inform you that intmath.com has been selected to be featured permanently on AllMyFaves' brand new Education Page. If you are not yet acquainted with AllMyFaves, we offer a unique and innovative homepage, a gateway to a visual exploration of the Internet. In each of our favelines, you'll find the top 10 web sites in that category.

We chose to feature your site among the top 10 in your category, since we feel it offers a valuable educational resource for users all over. Therefore, we thought it deserved a permanent seat in our Education page.

You'll see the IntMath logo in the line of math sites on the AllMyFaves education page.

Reader Feedback: I've also have had some lovely feedback from readers recently. This one is from Irene Grossart, Glasgow, UK:

Just found this site...it is so good I forgot to drink my coffee. I will be back!

5. From the math blog

a) Bilingual Fridays
Why does an article on bilingualism in politics get most of its visitors on a Friday?

b) Friday math movie - The mathematics of war
Here’s an attempt to model the probability of casualties in war.

c) Average speed and percentage
Here are 2 math problems that are not what they seem at first.

d) Reducing math anxiety in Iceland
A student from Iceland has some interesting things to say about math, the environment and expanding into space.

6. Final thought - The road to truth

The following quote (attributed to the Buddha) applies to math students, too.

There are two mistakes one can make along the road to truth - not going all the way, and not starting. (Buddha)

When faced with a math problem, try not to make either of these 2 mistakes. It's worth it in the end!