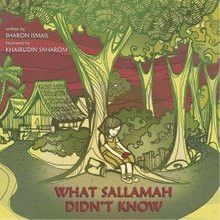 Sharon Ismail always seems very comfortable with people - not only with Chinese, Malays and Indians but also yours truly, an ang mo (slang term for Caucasian). She is multi-cultural and multi-lingual in a way that somehow encapsulates Singapore for me.

Now that I have read her book, What Sallamah Didn’t Know, I have a much better understanding of how Sharon manages to reach out to so many people.

This delightful short paperback tells the story of Sharon’s mother - Sallamah - who was given up for adoption by her Chinese parents when she was a baby, "because she was a girl".

The adoptive family was an interesting cultural mix (Indian father and Malay mother) and Sallamah was brought up as a Malay.

The story is ably illustrated by Khairudin Saharom in a style that appropriately captures kampung life. My favourite illustration is the use of footwear as a metaphor for the members of Sallamah’s family (Mak and Bak the parents and their 6 children, 4 of whom were adopted).

After releasing What Sallamah Didn’t Know, Sharon received some feedback and it left her wondering about the following questions.

"Would parents and children who haven’t had first-hand encounters with adoption be able to appreciate What Sallamah Didn’t Know?"

I have not had first-hand experience with adoption, but I certainly appreciated the book on several levels:

My daughter and (Japanese) wife both enjoyed the story as well. Finding cultural identity was a theme that particularly resonated with my daughter.

"Were the (emotional) layers expressed in the writing too difficult for these readers?"

I don’t believe so. The story had an emotional depth that can be appreciated at many levels and by different ages.

"Are the writing and illustrations too depressing?"

Not at all. Any story has to have elements of conflict, identity crisis or discovery. This story has them all. Being able to share Sallamah’s delight at the way she is treated by her peers, despite her fears after she found out her real background, provided an uplifting finale.

I enjoyed What Sallamah Didn’t Know and strongly recommend it to anyone who would like to find out that Singapore is more than Orchard Road.

Personal note: Congratulations on giving birth to a delightful book and a delightful baby within a few months of each other, Sharon!

3 Comments on “What Sallamah Didn’t Know”